AFP: Iran’s ban on fuel tankers crossing into Afghanistan over accusations that they are supplying NATO troops is snaring ordinary Afghans in a complex power game as living costs rise, experts say. 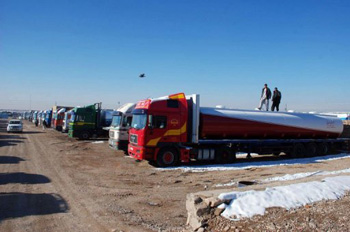 KABUL (AFP) — Iran’s ban on fuel tankers crossing into Afghanistan over accusations that they are supplying NATO troops is snaring ordinary Afghans in a complex power game as living costs rise, experts say.

Some 2,000 trucks are stranded on the Iranian-Afghan border, Afghanistan’s commerce ministry says, in a standoff which has run since early December, heaping more misery on civilians in the war-torn, impoverished country.

Behind it all is Iran’s desire to strike out at the international community over its disputed nuclear weapons programme and at Afghanistan over efforts to make peace with the Taliban, according to some analysts.

NATO insists it does not use fuel which passes through Iran and that the operations of its troops in Afghanistan are not being affected.

But that is cold comfort to ordinary Afghans who, with the first snows of winter recently falling in the capital Kabul, face paying 40 percent more for fuel, plus extra for other day-to-day essentials.

The situation has caused a wave of protests outside the Iranian embassy in Kabul, including one last week when angry demonstrators reportedly pelted the building with tomatoes and eggs.

The fuel ban is playing out on the streets of Kabul, pushing prices of many goods up and hitting local people hard.

Explaining the problems Afghans face, Ali Agha, a 50-year-old dried fruit seller, said: “Dried fruit is one of the main needs for people in the winter and people are bargaining while buying it. All I can tell them is that the fuel has become expensive.”

A young chemist, Rahmatullah, added: “Every day, we argue with customers regarding the price of medicine… the medicines are mainly coming from Iran and Pakistan and the fuel price rise has affected prices directly.”

Iran first blocked fuel trucks from crossing into Afghanistan last month because, according to Kabul’s deputy commerce minister, it believed their cargo was going to supply US and other international troops fighting the Taliban.

Afghan Vice President Mohammad Qasim Fahim said last month he had secured an agreement to lift the ban during a visit to Tehran, and the Iranian government insists the question has been settled.

But Faridullah Sherzai, a spokesman for the commerce ministry in Kabul, said only 40 trucks per day were being allowed through from Iran to Afghanistan, while local drivers put the figure at around half that.

Sherzai stressed that other routes were available for fuel coming into Afghanistan, through Pakistan and central Asian countries. But it is thought that around 30 percent of Afghanistan’s fuel comes through Iran.

Gran Hewad, a political researcher at think-tank the Afghan Analysts Network, said Iran was pursuing two strategies by implementing the fuel blockade — one international and one regional.

“From an international point of view, it’s reacting to the recent pressure which the international community brings on it regarding nuclear weapons and some other transactions,” Hewad said.

“In the regional dimension, it’s going to react to the peace process in Afghanistan which it opposes.”

Iran has faced four rounds of UN sanctions over its disputed nuclear programme, which major world powers fear is disguising weapons ambitions but Tehran insists is for civilian purposes.

It held talks with six leading world powers on the issue in December after a 14-month hiatus and is due for another round on January 21 and 22 in Istanbul.

Afghan President Hamid Karzai has in recent months made peace negotiations with the Taliban a top priority, despite few signs of success so far.

Iran is seen as hostile to the Taliban for religious reasons but some reports have accused it of supporting the militants as a balast to the regional influence of the US, sometimes described by Tehran as the “Great Satan.”

Other political analysts say relations between Afghanistan and Iran would also likely be affected by the situation.

“After standing up for Iran against the West, the US and NATO, and defending its relations with it, the banning of the fuel trucks I think has badly hurt Afghanistan’s government,” he told AFP.

Iranians turn out in force to demand EU policy change

Iran Focus: Thousands of Iranians from as far away...