Reuters: Afghan fuel protesters targeted an Iranian diplomatic mission for a second day on Sunday, as the commerce minister said Tehran had not given any reason for an export clampdown that is choking Afghan oil supplies. 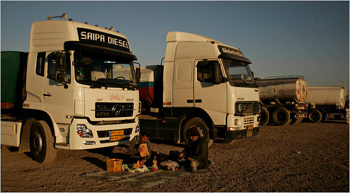 KABUL, Jan 16 (Reuters) – Afghan fuel protesters targeted an Iranian diplomatic mission for a second day on Sunday, as the commerce minister said Tehran had not given any reason for an export clampdown that is choking Afghan oil supplies.

Around 300 people took to the streets in western Herat city, armed with stones and eggs, and marched to the Iranian consulate carrying banners with slogans including “Death to Iran”.

“The stoppage of fuel tankers has created great problems and a crisis for us in terms of fuel supply,” Ahadi said, adding that around 40 percent of the landlocked country’s fuel usually comes from Iran. Afghanistan is suffering after several weeks cut off from a major supply route.

“The Iranian authorities have assured us the issue is being solved but unfortunately the crisis is where it was,” Ahadi told a news conference in the capital Kabul.

Fuel prices have gone up around the country, in some areas by as much as 35 percent, the Afghan Chamber of Commerce and Industries said earlier this week. Provinces bordering Iran have seen the most dramatic increase.

Kabul has asked Kazakhstan to sell Afghanistan some 200,000 tons of fuel immediately, and private sector deals have been made with a Russian oil firm , Ahadi said.

“We are unhappy about the progress of our negotiation with Iranian authorities in regard to tackling the crisis,” he said.

“We have not yet heard any convincing justifications from Iranian authorities (for the blockage).”

Iran has rejected Afghan criticism, saying the slowdown was due to “technical problems” related to the reduction of Iranian fuel subsidies and that the issue was now being solved.

Demonstrations earlier in the week in Kabul about both fuel prices and the deaths of Afghans in Iran prompted Tehran to call in the Afghan ambassador in protest.

The Afghan Chamber of Commerce and Industries said it was told by Iranian officials the tankers were delayed because Tehran believed the fuel was destined for U.S. and NATO forces, which are fighting a resilient insurgency in Afghanistan.

Ahadi also said he thought worries the oil was reaching international forces could be the reason for the blockade.

A spokeswoman for the NATO-led International Security Assistance Force (ISAF) said their fuel came from other routes.

“ISAF and NATO do not receive any fuel shipments through Iran, so operationally the blockade does not impact ISAF,” said spokeswoman Major Sunset Belinsky.

(Additional reporting by Emma Graham-Harrison in Kabul and Sharafuddin Sharafyar in Herat; Editing by Daniel Magnowski)

US Tough Line on Iran Is Being Implemented