AP: An Iranian supercomputer. New space rockets and satellites carrying the flag of the Islamic Republic. Biotech innovations that include artificial tendons. 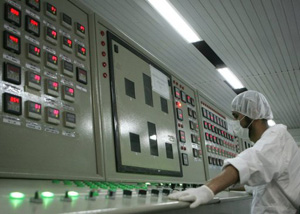 Iran’s claims of scientific advances are coming at a rapid-fire pace these days as the country begins events to mark the anniversary of the 1979 Islamic Revolution.

It’s become part of annual celebrations of scholarship and military might. But this year, there is an added message to the West after the latest talks over Iran’s nuclear program fizzled in January: Tehran’s ability to make atomic fuel remains at the heart of the country’s drive for home-grown technology.

“The government’s support for science and technology is an unchangeable strategy,” said President Mahmoud Ahmadinejad last month at a high-tech trade exhibition in Tehran. “This includes the nuclear efforts.”

It’s hardly a new statement from the Islamic Republic, which has repeatedly insisted it will not negotiate over its right for uranium enrichment under international pacts. This message, however, be reinforced strongly in the coming days as officials boast about Iran’s innovations.

It also offers an important lesson in how much political capital is vested in Iran’s effort to stake its claim as the scientific vanguard of the Muslim world.

The expo is expected to showcase an array of made-in-Iran innovations from more than 120 companies including precision industrial equipment, nanotechnology and aerospace-related items. No nuclear technology is on the list.

An Iranian diplomat in Syria told The Associated Press that the five-day exhibition — the first of its kind outside Iran — aims to show “friend and foe” that sanctions have not slowed Iran despite claims by U.S. Secretary of State Hillary Clinton and others. The diplomat spoke on condition of anonymity because he was not allowed to brief reporters.

Ali Reza Khamesian, a journalist for the moderate newspaper Melleat-e Ma newspaper in Tehran, said the technology show seeks to project Iran as the “most powerful and independent country in the region.”

“It has a clear goal,” he said. “That is to show the regional countries that Iran is unique since it has achieved technological achievements” despite sanctions.

During the coming week, Iranian officials have promised to display a new range of rockets and satellites — which could raise more concern in the West that Iran’s space program spilling over into possible efforts at creating a long-range ballistic missile arsenal.

A year ago, Iran announced it launched some animals — including a mouse, two turtles and worms — briefly into space on a research rocket. In February 2009, Iran sent its first satellite into orbit.

Meanwhile, Iranian officials have unveiled an array of purported advances in recent weeks, including a new gamma radiation units for medical treatments and a supercomputer billed as among the top 500 most powerful in the world.

Iran’s deputy president for science and technology, Salar Amuli, told state television that computer’s power will be used for areas that include nuclear physics.

On Kish Island in the Gulf, a biotech center is planned to make artificial tendons and ligaments , state-run Press TV reported.

Besides the jabs against sanctions, Ahmadinejad also plays heavily on the connection between technology and Persian pride. He frequently sprinkles his remarks about how Iran should reclaim the banner of scientific advancement it once held as the Persian Empire.

‘History has shown that the Iranian nation was pioneer of achieving scientific progress,’ he said last week.