Iran plans to send ships close to US waters: report

AFP: Iran’s navy is going to deploy ships close to US territorial waters, its commander in chief was quoted as saying on Tuesday. 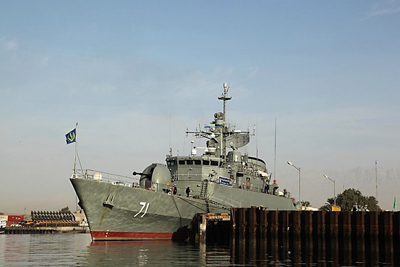 TEHRAN (AFP) — Iran’s navy is going to deploy ships close to US territorial waters, its commander in chief was quoted as saying on Tuesday.

“As the global oppression (the US) is present not far from our maritime border … our navy is going to have a strong presence not far from US territorial waters,” the Irna news agency quoted Admiral Habibollah Sayyari as saying.

On July 19 Sayyari also said that Iran was going to send “a flotilla into the Atlantic”.

The remarks come as another high-ranking Iranian appeared to reject a recent US request to establish a “red phone” link between the countries to avoid unwanted confrontation between their armed forces in the Gulf region.

“When we are in the Gulf of Mexico, we will establish direct contact with the United States,” Ali Fadavi, commander of the Iranian Revolutionary Guard Corps Navy, was quoted in press reports as saying.

“In the view of the Islamic Republic of Iran, the presence of the US in the Persian Gulf is illegitimate and makes no sense.”

The Iranian navy has been developing its presence in international waters since last year, regularly launching vessels in the Indian Ocean and the Gulf of Aden to protect Iranian ships from Somali pirates operating in the area.

Iran also sent two ships into the Mediterranean for the first time in February, via the Suez Canal, to the annoyance of Israel and the United States.

And in July, leaders announced that a Kilo class submarine had completed an inaugural mission in the southern Indian Ocean and the Red Sea.