AFP: US House Speaker John Boehner urged Iran on Wednesday to spare the life of an Iranian pastor reportedly facing execution for refusing to recant his Christian faith and return to Islam. 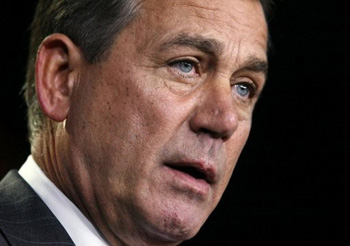 WASHINGTON (AFP) — US House Speaker John Boehner urged Iran on Wednesday to spare the life of an Iranian pastor reportedly facing execution for refusing to recant his Christian faith and return to Islam.

“I urge Iran’s leaders to abandon this dark path, spare Yusef Nadarkhani’s life, and grant him a full and unconditional release,” Boehner, a Republican and the number-three US elected official, said in a statement.

Nadarkhani, now in his early 30s, converted from Islam to Christianity at the age of 19 and became a pastor of a small evangelical community called the Church of Iran.

He was arrested in October 2009 and condemned to death for apostasy under Iran’s Islamic Sharia laws, which however allow for such verdicts to be overturned if the convicted person “repents” and renounces his conversion.

After his conviction was upheld by an appeal court in Gilan province in September 2010, Nadarkhani turned to the supreme court. His wife, who was initially sentenced to life imprisonment, was released on appeal.

In July, Nadarkhani’s lawyer told AFP that Iran’s supreme court and overturned the death sentence and sent the case back to the court in his hometown of Rasht — but fresh media reports this week said a provincial court in Gilan had again sentenced him to death.

“Religious freedom is a universal human right,” Boehner declared, saying the prospects Nadarkhani could be executed “unless he disavows his Christian faith are distressing for people of every country and creed.

“While Iran’s government claims to promote tolerance, it continues to imprison many of its people because of their faith. This goes beyond the law to an issue of fundamental respect for human dignity,” said Boehner.

German reporter says he was beaten in Iran

AP: A German reporter says he was beaten by...

AP: Iranian authorities are restricting all journalists working for...