Reuters: An Iranian dissident leader urged major powers on Saturday to stop appeasing Tehran and start supporting opposition groups after the latest round of talks on Iran’s nuclear program ended in deadlock.

By John Irish and Sunaina Karkarey 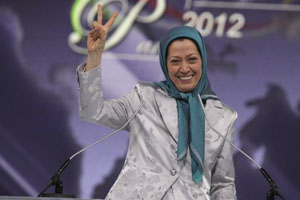 (Reuters) – An Iranian dissident leader urged major powers on Saturday to stop appeasing Tehran and start supporting opposition groups after the latest round of talks on Iran’s nuclear program ended in deadlock.

Maryam Rajavi, who heads the Paris-based National Council of Resistance of Iran (NCRI), also accused the United States of dragging its heels on a decision to remove her group from its terrorist list.

“Western countries lost this decade by providing all sorts of incentives to the Mullahs – a decade of appeasement and fruitless negotiations,” Rajavi said ahead of a meeting of thousands of Iranian exiles on the outskirts of Paris.

World powers and Iran failed to secure a breakthrough at talks on Tehran’s nuclear program on June 19 and set no date for more political negotiations, despite the threat of a new Middle East conflict if diplomacy collapses.

The West fears Iran is working to develop an atomic bomb. Tehran says its nuclear work is focused on generating electricity and other peaceful projects.

The NCRI, an umbrella bloc of five opposition groups in exile that seek an end to Shi’ite Muslim clerical rule in Iran, were first to expose a secret uranium enrichment plant at Natanz in 2002.

“Stopping the Mullahs’ nuclear threat is possible only through changing (its) dictatorial regime,” she said. “If one is not interested in handing the bomb to the Mullahs, one should side with the Iranian people’s resistance to topple the regime.”

Also known as the People’s Mujahideen Organization of Iran (PMOI), the group led a guerrilla campaign against the U.S.-backed Shah of Iran during the 1970s that included attacks on U.S. targets.

The United States added the group to its official list of foreign terrorist organizations in 1997, but the group has since renounced violence.

It has mounted a legal and public relations campaign to have its terrorist designation dropped. A U.S. appeals court ordered Secretary of State Hillary Clinton to decide on its fate by October 1.

“Following the June 1 ruling … the State Department has no choice but to delist the PMOI, unless it wants to again trample upon justice and law to satisfy the Mullahs,” Rajavi said.

AFP: Iran and its "destabilising actions" in the Middle East...