By Ladane Nasseri and Yeganeh Salehi 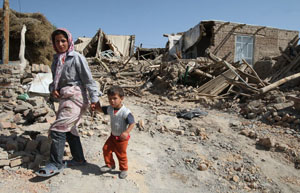 Images on Iranian state television showed people in the region sleeping outside in streets and parks, without tents or supplies, as the local correspondent said they feared additional aftershocks. More than 50 aftershocks were recorded in the province in the past two days, according to the Tehran-based Iranian Seismological Center.

Iran announced two days of public mourning in East Azerbaijan, the province struck by the quakes. The northwest is home to Azeris, who speak a Turkic language and are the country’s largest ethnic minority.

The country sits on several fault lines and is frequently hit by earthquakes. An estimated 40,000 people were killed in 2003 when a temblor flattened the city of Bam in the southern province of Kerman.
Aid Offers

Earlier in the day, Interior Minister Mostafa Mohammad- Najjar said Iran had received offers from abroad and had declined them. “We will carry out relief work by relying on our domestic potential,” IRNA quoted him as saying.

The earthquakes “should have at most injured 10 people,” Bahram Akasheh, a seismologist, told the Iranian Labor News Agency. “A great deal of damage was sustained because of the unsuitable structures in our provinces and villages.”

Out of the 4,500 people who were injured, about 1,200 were transferred to hospitals mostly in Tabriz and the rest treated in ambulances and makeshift treatment centers, said Gholamreza Masoumi, a Health Ministry official and head of the emergency services, according to the state-run Fars news agency.

Masoumi said he was concerned about a shortage of makeshift toilets and bottled drinking water that could lead to a spread of disease. The corpses of farm animals, some of which were found lying near water sources, could also contribute to an outbreak, he said.

The U.S. Geological Survey said the quakes hit within 11 minutes of each other in the late afternoon. The first had a magnitude of 6.4 with an epicenter 12 miles (20 kilometers) west-southwest of Ahar. It was followed by a 6.3-magnitude temblor 19 miles west-southwest of the area. Both occurred at a depth of less than 6.2 miles, the USGS said in advisories on its website.

Germany to Iran: It’s not too late to avoid sanctions

Reuters: The conflict between Russia and Georgia may indirectly...