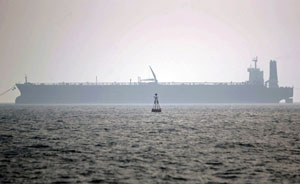 The first Indian ship to carry oil from Iran with Indian insurance is scheduled to load up in Iran on Wednesday, a shipping company executive said. This is a breakthrough for the Indian government, which has scrambled to maintain vital Iranian oil imports after European sanctions blocked third-party insurance in July.

The MT Omvati Prem — a tanker contracted to carry 85,000 metric tons of crude oil from Iran for Indian state refiner Mangalore Refinery and Petrochemicals Ltd. — is scheduled to arrive in India by Aug. 25, said Kowshik Kuchroo, president of shipping for Mercator Ltd., an Indian shipping company.

“This being a government of India cargo, it has a different sense of importance. We’re not doing it just for business,” Kuchroo said Monday. “India is in definite need of the crude. At a short notice, we can’t just snap the supply.”

Mercator is insuring the ship with $50 million in hull and machinery insurance, which covers physical damage to the ship, from state-owned New India Assurance Co. It’s insuring the vessel with another $50 million in protection and indemnity insurance, which covers a broad range of liabilities, including environmental pollution and cargo damage, from government-backed United India Insurance.

That is a far cry from the $1 billion in coverage Indian companies like Mercator got from European insurers, which used to underwrite most maritime coverage. European Union sanctions that prohibit EU companies from offering insurance on tankers carrying Iranian crude took effect July 1, part of the U.S.-led effort to tighten sanctions on Iran to cut off funds for its nuclear program.

Mercator aside, most Indian shippers don’t like the terms of the insurance coverage and have declined to send tankers to Iran.

“The coverage modalities are yet to be worked out,” he said. Once mutually acceptable terms can be reached, he said his company would be happy to haul Iranian oil. No shipments are now scheduled, he said.

China, India, Japan and South Korea are among Iran’s most important oil export markets. The Obama administration exempted all four countries from U.S. sanctions after they significantly reduced their imports of Iranian oil.

Japan was the first country to devise a workaround to the EU sanctions, offering its shippers a robust $7.6 billion per tanker in government-backed insurance for oil cargo from Iran. Japan’s Parliament passed the emergency measure in late June to avoid a disruption to critical oil supplies due to actions against Iran.

Iran has offered to deliver crude on its own ships to China, South Korea and India. But Iran’s fleet size is limited and some companies are skeptical about the viability of Iranian insurance cover, analysts say.

“The complications in securing alternative arrangements to continue importing Iranian oil in view of tanker insurance problems are prolonging import problems for some countries, who are looking toward alternative suppliers,” said Tom Grieder, Asia-Pacific energy analyst for IHS World Markets Energy. “While Japan has provided state-backed insurance cover, Indian insurance cover is not particularly large and refiners still face import risks. More broadly, there continue to be concerns about the viability and validity of Iranian insurance cover, which has been offered to China and South Korea.”

South Korea stopped importing Iranian crude in July, when the insurance sanctions hit. Two refiners told The Associated Press on Monday that they were in talks with the South Korean and Iranian governments about using Iranian tankers under Iranian insurance cover to import oil.

“Iran first made the offer,” said Eom Ik-hoon, spokesman for South Korea’s largest refiner, SK Energy, which imported 10 percent of its crude from Iran before the sanctions hit. “We are discussing details with the South Korean government, but we do not know when imports will be resumed.”

The Guardian: For centuries its rich aromas and ornate...