AFP: A $40 million engineering structure belonging to Iran’s South Pars gas field to be used in offshore platforms sank into the Gulf as it was being installed, media reports said on Wednesday. 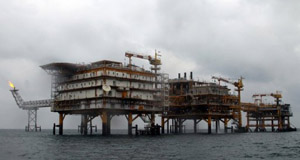 TEHRAN (AFP) — A $40 million engineering structure belonging to Iran’s South Pars gas field to be used in offshore platforms sank into the Gulf as it was being installed, media reports said on Wednesday.

“An investigation is under way,” SADRA’s managing director Mehdi Etesami told the ISNA news agency, without giving an official reason for the incident.

The equipment was built by Maritime Industrial Company (SADRA), an affiliate of the industrial wing of Iran’s Revolutionary Guards, over a 30-month period.

The incident occurred Monday night as the 1,850-tonne jacket developed for South Pars Phase 13 sank to a depth of 80 metres (264 feet), media reports said, adding that there were no reports of any casualties.

Because of its links to the Guards, SADRA is subject to sanctions imposed by the European Union and the United States over Tehran’s controversial nuclear programme.

Along with other industrial subsidiaries of Guards engineering wing the Khatam al-Anbiya group, SADRA was in 2010 awarded a $5-billion contract to develop Phase 13 after Western energy majors withdrew over the sanctions.

Tehran considers the development of the South Pars field, which is jointly owned by Qatar, to be a strategic priority.

Iran says it currently produces about 650 million cubic metres of gas daily, including 280 million from South Pars, most of which is used for domestic consumption.

President Mahmoud Ahmadinejad said in early January that Iran plans to double the field’s production capacity by summer 2013, but the accident is expected to delay the launch of Phase 13 by several months.

Once completed, Phase 13 is to produce around 56 million cubic metres of gas daily.

Major Western companies that previously operated in South Pars, among them France’s Total and Anglo-Dutch giant Shell, withdrew from Iran between 2007 and 2010 after sanctions were imposed over Tehran’s atomic ambitions.

Iran, which has the world’s second-largest natural gas reserves after Russia, claims it is able to develop South Pars on its own by giving many of the projects to companies affiliated to the Guards.