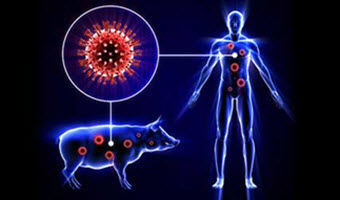 London, 29 Dec – Deaths from a swine flu outbreak in Iran have more than tripled in the past three weeks to at least 112, Agence France-Presse said Monday, quoting Iranian state media.

Mohammad Mehdi Gouya, head of the Health Ministry’s communicable diseases department, was quoted as saying the outbreak, which began in November, was under control and likely to diminish in coming days.

He was also quoted as saying that nearly 1,200 people had been hospitalized with the sickness caused by the virus, known as H1N1.

A nurse died Sunday after contracting the flu from patients at a hospital in the northeastern town of Neyshabour, the state-run Mehr news agency reported Monday.

A major H1N1 outbreak sparked a World Health Organization pandemic alert in June 2009, after the virus emerged from Mexico and the United States.