Iran’s Revolutionary Guards fire rockets near US warships – US 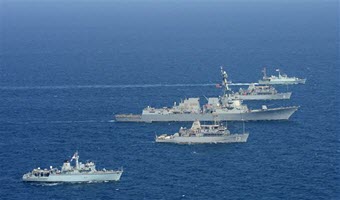 London, 30 Dec – Iranian Revolutionary Guards ships launched rockets near the US aircraft-carrier Harry s. Truman and other coalition warships on 26 December, according to a US official who called that action “unsafe”. It said Iran gave very short notice before the tests.

The rockets were fired in the Strait of Hormuz, close to the coalition warships involved in supporting airstrikes against ISIS in Iraq and Syria, a US military spokesman said early on Wednesday.

NBC News, citing unnamed US military officials, said the Guards were conducting a live-fire exercise and the Truman came within about 1,500 yards (metres) of a rocket.

“The rockets were not fired at the Truman and other ships, only near them”, the network said.

Navy Commander Kyle Raines, spokesman for the US Central Command, said the Revolutionary Guards vessels fired the rockets “in close proximity” of the warships and nearby merchant traffic “after providing only 23 minutes of advance notification”, Reuters reported.

“These actions were highly provocative, unsafe, and unprofessional and call into question Iran’s commitment to the security of a waterway vital to international commerce”, Raines said in an email to Reuters.

Iranian and US forces have clashed in the Gulf in the past, especially during the Iran-Iraq war in the 1980s.

Iranian media did not immediately report on the incident, which comes amid a thaw in US-Iranian relations following the signing of a landmark nuclear deal in July of this year that envisages the lifting of international sanctions on Tehran in exchange for cutbacks in its nuclear program.