Paris, 24 Dec – Muslims and Christians can rely on their “common values” to stand up to extremists who “pervert their religions”, Iranian opposition leader Maryam Rajavi said in a Christmas message on Thursday. 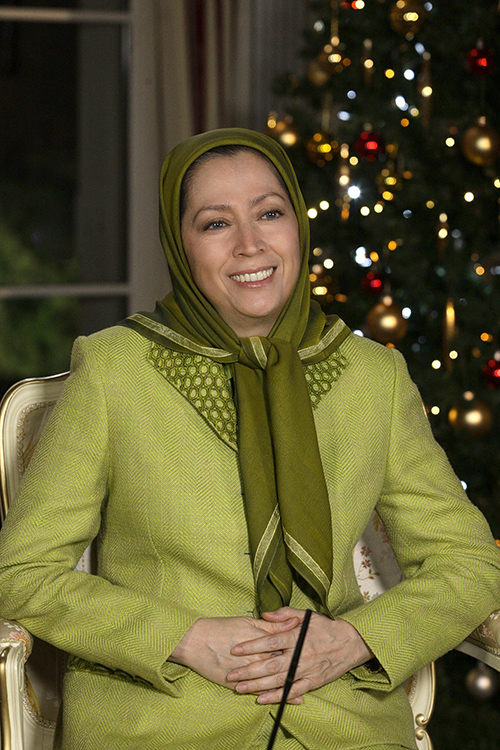 In a message to Christians in Iran and around the world, Rajavi said: “I would like to greet you on Christmas and the birth of Jesus Christ, which has coincided this year with the birthday of the Prophet Mohammad”.

“When our world is under the attack of terror and extremism, we can find the light of freedom and tolerance and perseverance against fundamentalism and extremism in these births”.

“In contrast to what the extremists want, we should make our hope and faith in humanity deeper than ever”, Rajavi said.

“Let us hope for a swift end to extremism and for the freedom of the people of Syria from dictatorships of Bashar Assad, Khamenei and Daesh terrorists”, she said, referring to Syria’s ruler, Iran’s Supreme Leader Ayatollah Ali Khamenei, and the Sunni fundamentalist group also known as Islamic State (ISIS/ISIL).

“Let us hope for end to displacement and homelessness of Christians throughout the Middle East. And let us hope for the relief of converted Christians in Iran from the oppression of the ruling mullahs and for freedom of the whole Iranian nation from this religious dictatorship”.

“On this occasion, I call on the world community to form an international front against the religious dictatorship in Iran and its proxies and militia in Syria and Iraq and to fight Islamic extremism, the enemy of true Muslims, Christians and all followers of other divine religions”, Rajavi said.

Rajavi, President-elect of Iran’s largest opposition group, the National Council of Resistance of Iran (NCRI), presents a formidable challenge to Iran’s ruling theocracy. As a Muslim woman, she has given extensive lectures on modern and democratic interpretations of Islam as opposed to what she describes as a “reactionary, fundamentalist” interpretation of the religion by the clerical establishment.

In an opinion piece last week for World Policy, Rajavi wrote: “The breed of extremism that we face today is a lethal cocktail of medieval barbarism and modern-day fascism. It is a worldview that shuns political tolerance, promotes misogyny, and, of course, glorifies violence. This specific brand pursues the implementation of Sharia and its draconian punishments. It has never had any connections to Islam, and there is clearly no place in the modern world for such a worldview”.

“History tells us that nothing is more dangerous for fundamentalism and extremism than democratic and moderate ideals. This has been made clear in Iran, where the regime’s suppressive tactics find their chief targets are the moderate Muslim factions, including the Mujahedin-e Khalq (MEK), whose thousands of members reside in Camp Liberty, Iraq”.

“To meet with true success, the current military campaigns and intelligence operations in the region must be complemented by the promotion of an interpretation of genuine Islam that is both democratic and tolerant. Only through a nuanced but unambiguously affirmative strategy that provides lasting moral and physical support to the people of Iran and the region in their quest for freedom and moderate leadership will we escape the echoes of history’s darkest narratives”, she added.

Reuters: Twenty-nine people were killed and 11 injured when...