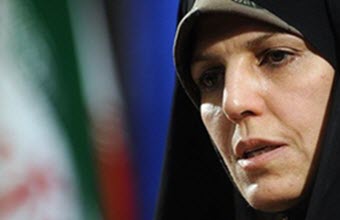 Tehran, 13 Apr – Shahindokht Molaverdi, Iran’s Vice President for Women and Family Affairs, has been summoned to the Prosecutor’s Office in order to explain remark she made about executions in the villages of Baluchistan and Sistan in the southeast of the country.

State-run news agency ISNA carried a statement from Gholam-Hossein Mohseni Eje’ii, a Judiciary spokesperson, which said: “Mrs. Molaverdi has been summoned and is due to report to the Prosecutor’s Office to explain about the file that has been opened”.

Molaverdi made the comments at a conference in February 2016, telling attendees about the plight of villages where all the men had been killed by the government security apparatus.

The order comes as the European Union extends sanctions against Iranian individuals and entities for a further year due to human rights violations. Member of the Iranian justice system and security apparatus are amongst those sanctioned.

Further investigation into the killings showed that the incidents were not isolated. Several villages are thought to have been targeted. The government cited drugs offences as the reason for the mass executions.

“Iranian authorities have repeatedly admitted that the death penalty has not solved the problem of drug trafficking, but they still continue to execute people for drug charges. In 2015 the number of executions in Iran for drug offences was the highest in 20 years”, the Times of India quoted Mahmood Amiry-Moghaddam, a spokesperson of Iran Human Rights, as saying.

However a burgeoning information war means that it is possible no crime was committed. Indeed the UN does not deem drug crimes as serious enough to warrant the death penalty.

Bloomberg: Iran has discovered its first oilfield in the...