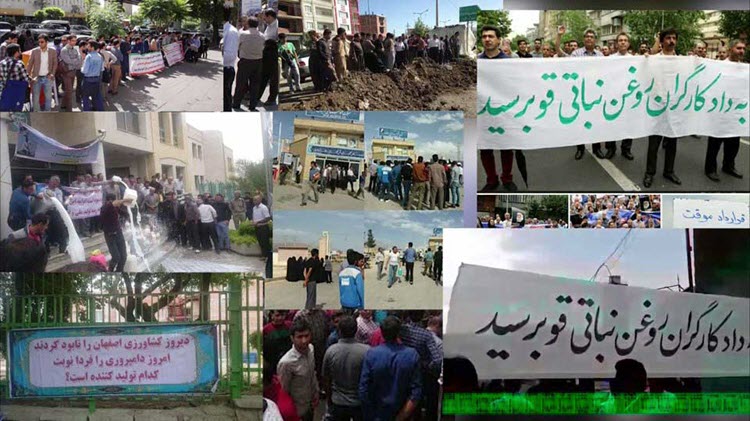 London, 17 May – Protests continue across Iran over the derisory treatment workers and students are facing from the Iranian government. From street painters to doctors, the whole spectrum of occupations are voicing their unhappiness.

Students at Sama University in Kermanshah in the west of Iran have been told a prerequisite for a test card is not a module but a fully settled tuition fee bill. Protestors said they cannot pay the fee; preventing them access to jobs that would increase their chances of paying the fee. Staff from the general department of physical education in Kermanshah were also protesting over unpaid salaries and up to five months of overtime payments. Another student protest at the Free University of Kashan of around 200 students was against the low quality of food provided by the university.

Market traders in Tehran’s Yaft-Abad district, in particular the furniture sellers of Omid Mall shut down their businesses and took to the streets amid a severe recession with gloomy future prospects. Many of those protesting are disappointed with the way Iran’s government is prioritising realpolitik over the people.

The fate of Padideh Shandiz, a development company with close links to the Islamic Revolutionary Guards Corps (IRGC), continues to be a pressing concern. The billion dollar company is thought to have been manipulating share prices and acting beyond its parameters as a private company. Protestors held a rally outside the office of President Hassan Rouhani on Pastour Street in Tehran. Almost 120,000 investors are demanding their investments returned after an exemplary rendition of state-corruption forced many of them into bankruptcy.

Citizens of Ahwaz, a town in south-west Iran, chose a football match as the stage for their protest against the re-routing of the Karoon River and building of Behest-Abad Dam. Simultaneously another group of protestors formed a human chain by the riverside.

The spread of protests, and the diversity of their targets show a rising level of dissatisfaction with the Iranian government’s ability to run a healthy and fair state.

UN Welcomes Hassan Rouhani Amidst Protests Against Massacre of 30,000