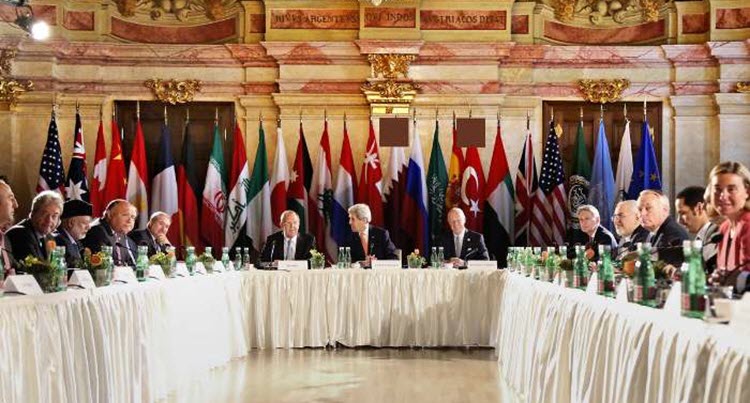 Vienna, 17 May – Senior politicians from around the world met in Vienna on Tuesday, to discuss an end to Syria’s civil war.

The International Syria Support Group (ISSG) meeting, chaired by US Secretary of State John Kerry and Russia’s foreign minister Sergei Lavrov, focused on how to end the bloodshed and provide immediate access for humanitarian aid into besieged communities.

The most controversial part of the plan involved an agreement on a framework for political transition between Syrian President Bashar al-Assad’s regime and the opposition forces. US officials insist that Assad should abdicate and want to set a deadline of 1 August. However, Assad shows no sign of surrender and his positions is bolstered with military support from Russia and Iran.

The Foreign Affairs Committee of the National Council of Resistance of Iran (NCRI) compared it to “asking an arsonist to take part in putting out the fire.”

The NCRI’s Shahin Gobadi said: “The Iranian regime has been the main reason for the Assad dictatorship’s survival. Without the mullahs’ massive military intervention and full-fledged support for Assad, his regime would have been overthrown a long time ago.”

Ordinary Syrians have posted photos of themselves holding up signs with messages to the ISSG. One calls for the Iranian regime to be “held accountable for their crimes committed in Syria in the past five years.” Another sign states that inviting Iran is the same as inviting their killers to the meeting.

In support of the Syrian people, supporters of the People’s Mojahedin Organization of Iran (PMOI or MEK) on Tuesday held a protest in central Vienna, denouncing Tehran’s involvement in the Syrian conflict.

Other MEK supporters protested outside The Hague over the weekend and urged the Dutch government to reconsider their relationship with the Iranian regime because of their support for Assad and their domestic human rights abuses.

The other peace talks in Geneva, mediated by UN envoy Staffan de Mistura, do not appear to have made much progress.

A senior US State Department official expressed doubts that the August deadline will be met. He told reporters in Vienna that while the opposition coalition have been open and cooperative, the Assad regime have not engaged, despite publicly backing talks.

He said: “The target for August is to have a framework in place, a framework agreed, for a political transition. We’re talking to the Russians, trying to get a better environment for the political negotiations, particularly on the regime side. The regime is just not there, and I think that’s really the key to it.”

The ISSG negotiated via Russia because although Russia endorsed the UN Security Council resolution that enshrined the ISSG peace plan in international law, they still provide ground-support for the regime. Lavrov told Russian news agencies that there is still a long way to achieve peace but he is hopeful that recommendations by the ISSG and the UN will effect change.

The Syrian civil war began in 2011 after Assad’s forces launched a violent crackdown on anti-government protests. They have since killed over 270,000 people, displaced millions and caused a global refugee crisis.

A previous peace treaty was agreed in February but the violence continued. The regime continues to block humanitarian aid in defiance of UN orders.

Strasbourg - Members of the European Parliament, joined by other dignitaries...

Tehran Is Concerned About a New “JCPOA Plus”

‘JCPOA Plus’, is an expression that Iran’s state-run daily...