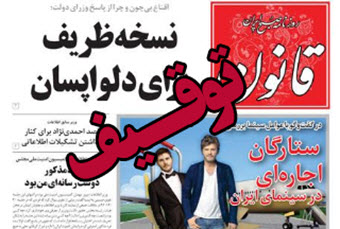 This news was announced on Monday via a statement on the newspaper’s website which said it had been shut down following complaints by the IRGC’s Department of Intelligence.

The paper was accused of “libel and publishing falsehoods to create public anxiety” but the specific reports that upset the IRGC are not mentioned.

Ghanoon was previously temporarily closed in 2014 over a report about corruption charges against a former IRGC member who had been released on bail.

The paper was also attacked in January, for criticising the way that the IRGC arrested American personally in Iranian waters.

The article said that the arrests, which were aired on Iran’s state television, were evocative of Islamic State beheading videos. The footage showed 10 U.S Navy sailors kneeling with their hands behind their heads

The IRGC commander Mohammad Ali Jafari said the article was a big mistake and that the Ghanoon “must repent for what it had said”.

Iranian President Hassan Rouhani promised social and political freedom when he came to office but many Iran watchers say he has not delivered.

AP: Iran has reinstated an offer for U.N. nuclear...