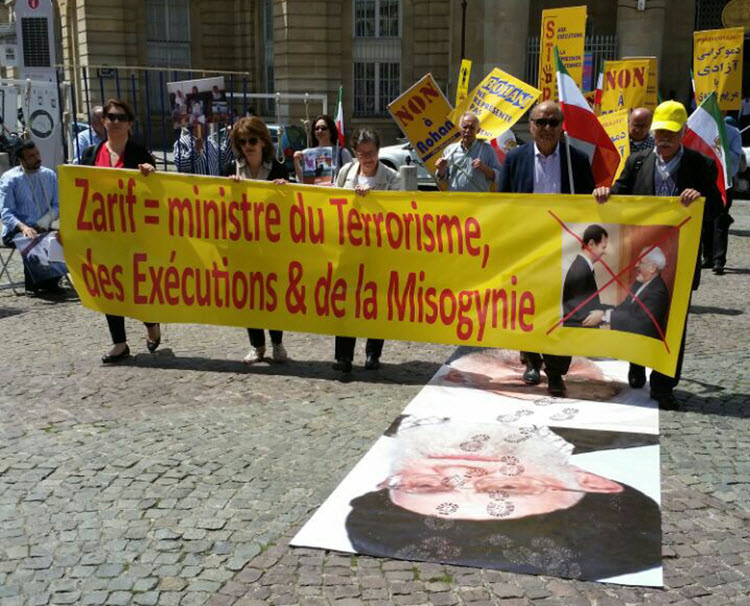 Paris, 23 Jun – The Iranian resistance and their supporters held a rally in Paris yesterday to protest a visit by the Iranian Foreign Minister, Javad Zarif.

Members of the National Council of Resistance of Iran (NCRI) addressed the rally to bring attention to the widespread executions in Iran and interference of Tehran in the Syrian civil war.

Zarif is a representative of the mullah’s extremist regime. Hassan Rouhani, President of Iran, was lauded by Western leaders as ‘moderate’ during the 2015 nuclear deal which promised to open up trade with Iran in exchange for an end to the Iranian nuclear programme.

However, his government holds the highest annual execution rate in Iran since 1991 and Iran now has the highest execution rate per capita. It continues to test nuclear weapons in violation of the United Nations resolution and its support for the Bashar al-Assad regime is destroying the Syrian people. If his government is moderate, then what would radical look like, the protesters asked.

The rally, attended by representative of Franco-Iranian associations and human rights organizations, was held in Paris’ Place de Panthéon at 10.30am. The participants joined the 270 Members of the European Parliament who called last week on EU countries including France to condition the continuation of relations with Iran’s regime to a halt to executions.

They also declared their support for the “Free Iran” rally scheduled to take place in Paris on July 9.

The Hill: Senate Democrats face a dilemma over whether to...