Rep. Judy Chu: Iranian regime is an affront to the democratic and peaceful Iran represented by the Iranian Resistance 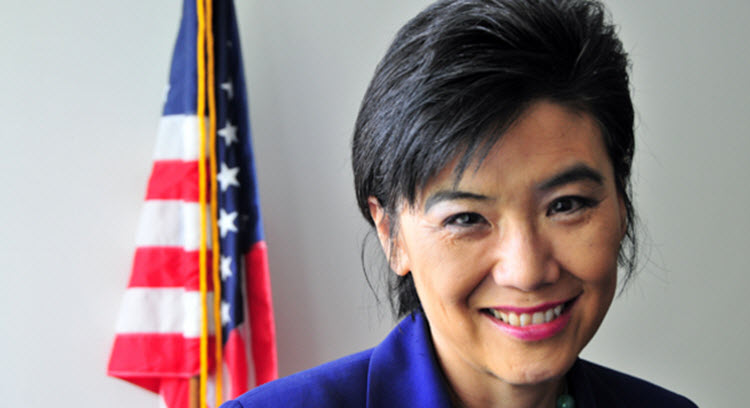 London, 7 Jul – Californian Congresswoman Judy Chu has made a video statement in which she decries the Iranian regime for its human rights abuses.

She said: “For too long Iran’s theocratic rulers have repressed their people and threaten others, already Iran is a world leader in executions second only to China, but now the leaders there are adopting increasingly cruel and inhumane punishments like blinding prisoners with acid or removing their eyes. This is an affront to the peaceful and open Iran that [the Resistance represents].”

She apologised for not being able to join the Free Iran rally in Paris this year but voiced her support for the resistance movement, led by Maryam Rajavi.

She said: “I want you to know that I stand in solidarity with you and your fight for freedom democracy and human rights in Iran”.

The rally, to be held this Saturday, July 9, will be attended by supporters from all over the world, from politicians to public figures to former political prisoners who wish to reveal the shocking abuses of the Iranian regime.

One of her biggest concern with the regime is their commitment to fund and incubate terrorism. They continue a nuclear programme that they agreed to suspend, attack political exiles inside what is supposed to be a safe zone, prop up the Bashar al-Assad regime in Syria and indirectly contribute to the spread of ISIS.

Chu said: “I strongly support your work to establish a free and Democratic Iran that works with US and others to build a safer world…and I know that these goals are shared by the people in Camp Liberty who struggle to survive in an increasingly perilous situation vulnerable to the aggression of the Iranian government and their proxies.”

Chu mentions the House Resolution 650, that she cosponsored, which will help ensure the safety and security for Camp Liberty residents.

She said that she wanted to continue working with president-elect of the National Council of Resistance of Iran, Maryam Rajavi to ensure the promotion of a free Iran.

The Free Iran rally, which supports the political platform of Maryam Rajavi, is this weekend on Saturday July 9.

Tampa Tribune: One year ago, the peace at a...