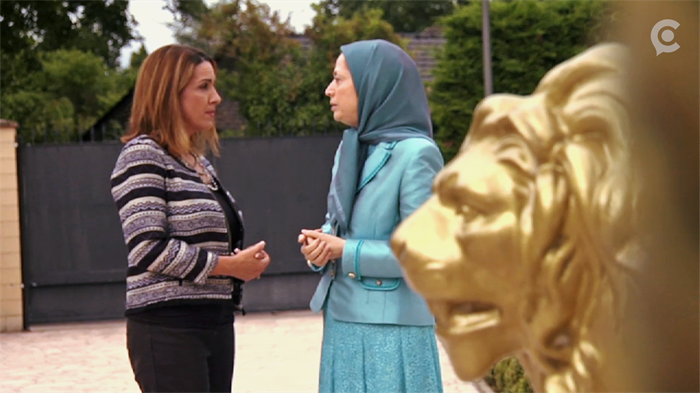 Iran Focus
London, 8 Jul – The President of the National Council of Resistance of Iran (NCRI), Maryam Rajavi, gave an interview to Circa News on Monday, July 4, where she discussed the horrific actions of the Iranian regime and the role of women in helping to end oppression and violence in the country.

Maryam Rajavi said: “[Women] must speak out; this is what the mothers can do. I believe it is time for women to enter into the political arena.”

Rajavi describes the Iranian regime as politically extreme, subjecting its Middle Eastern neighbours and even its own people to horrific acts of violence, oppression, and instability.

She has warned that the world can no longer stand on the sidelines watching the destruction unfold as it funds terrorist forces like Hamas, Hezbollah and its own Iranian Revolutionary Guards Corps (IRGC) while indirectly contributes to the spread of ISIS. She said that the West should not tolerate this oppressive regime.

Maryam Rajavi has firsthand experience of the regime’s brutality; six members of her family have been tortured and executed, along with a staggering 120,000 members of the Iranian Resistance – the vast majority were members of the People’s Mojahedin Organisation of Iran (PMOI or MEK).

She said: “My little sister was arrested. She was tortured extensively. She was torn limb from limb by torture until she was finally executed.”

Shortly after the interview, the news leaked of Iran’s rocket attack on political exiles – members of the PMOI – who were living in Camp Liberty in Iraq.

Rajavi’s method of fighting the regime involves a peaceful approach with the re-education of Islamic teachings of peace, a zero-tolerance to violent attacks and ensuring the minority groups are not oppressed as they are less likely to become radicalised, in the case of ISIS and the marginalized Sunnis in Iran.

She said: “If you want to fight against this phenomenon, we must dry up the swamp so the mosquitoes die.”

There is a grand gathering in Paris this Saturday, July 9, for all members and supporters of the Iranian resistance; it will be attended by world leaders, policy makers, journalists and religious leaders who support Maryam Rajavi’s democratic platform.

Reuters: The opening round of talks between Iran and...

AP: An Iranian-led shipping venture that predates the 1979...