The Iranian regime has played its last hand 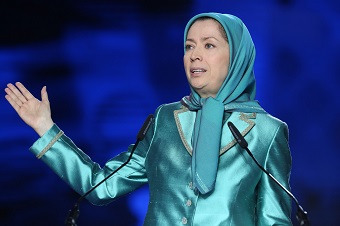 Paris, 10 Jul – At a mass rally in Paris, attended by more than 100,000 supporters, Maryam Rajavi, President-elect of the National Council of Resistance of Iran (NCRI), gave an analysis of the state of the Iranian regime one year on from its agreement on nuclear development with the West.

Mrs Rajavi began with Iran’s motives for entering into the Joint Comprehensive Plan of Action. The regime’s Supreme Leader, Ali Khamenei, had entered into the deal in order to stave off internal economic and political crisis. For regime survival, he accepted a postponement – for postponement is all the deal brings in terms of benefit to the West – in the acquisition of nuclear weapons, in anticipation of a flood of resources which would come his way with the lifting of some sanctions.

It has not worked out that way, Mrs Rajavi said. Western business has been reluctant to involve itself in Iran; and what increases in revenue there have been were used in foreign adventures, principally in Syria. As such, the Iranian economy went deeper into recession. “The financial and banking system are bankrupt,” with factories closing down “like falling autumn leaves,” she said.

Because basic economic needs cannot be met, protest has surged, in turn leading to an intensification in repression. Those groups seen as the least reliable – different ethnicities, Kurds, Arabs and Baluchis, and different faiths, Christians in particular, according to a recent Church statement – were most targeted for punishment.

Given these factors, as well as the existence of a highly capable Resistance, Mrs Rajavi said the regime is in real danger of being overthrown. That sense of vulnerability was made manifest in the regime’s missile bombardment, just days before the rally in Paris, of Camp Liberty, home to the unarmed People’s Mojahedin Organization of Iran (PMOI or MEK) in Iraq.

In fact, a range of US, European and Arab analysts and decision-makers who followed Mrs Rajavi to the rally’s podium came to the same conclusion about the weakness of the regime. There was, this year, less hope and more expectation of an end of the regime.

Turning to an analysis of Iran’s actions in the Middle East, Mrs Rajavi said that Iran’s pursuit of ethnic cleansing of Sunnis, through the Quds Force of the Islamic Revolutionary Guard Corps and its militias, had created the conditions in which Daesh (ISIS) could spawn. In short, Iranian violence was breeding ISIS violence; Iranian extremism, ISIS extremism. ISIS could not be cured while the Iranian regime continued to incubate it.

The West had, Mrs Rajavi appeared to say, at best, misunderstood the basic science of conflict.

Similarly, the West did not understand the nature of the regime, she said. The notion of velayat-e faqih – religious dictatorship – meant there could only ever be a contest between factions about how best to maintain that authority. To do anything else would be to remove the only source of legitimacy, insubstantial and manufactured as it is, to which any participant in government could lay claim.

In short, reform is self-immolation in the Iranian context for if any faction let the people decide, the people would throw them all out. Events in 2009 demonstrated the truth of this. A dispute about which faction had won the election rapidly escalated into an outpouring of disgust at the whole edifice of government enshrined in velayat-e faqih.

It is only the West, Mrs Rajavi said, which continues to empower the Iranian regime. This has disastrous consequences for the Iranian people, the Middle East and, ironically, for the West’s imperative of defeating ISIS. It is time, she said, that the West recognise the Iranian people’s right to freedom through recognising the Resistance.  It was not just a matter of good ethics but of good policy.

AFP: Iran said Saturday it had not seen enough...