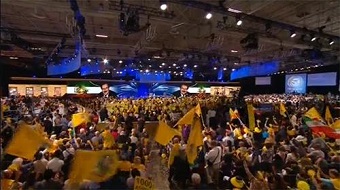 London, 10 Jul – According to the article in today’s (July 09) Saudi Gazette, over 100,000 Iranians have rallied in a grand gathering for the “Free Iran” rally this weekend in Paris.

European, American, and Middle Eastern officials and politicians stand shoulder to shoulder in support of rally organizer, the National Council of Resistance of Iran (NCRI) and its president-elect, Maryam Rajavi.  The NCRI represents a wide variety of Iranian opposition entities, such as the People’s Mojahedin Organization of Iran (PMOI/MeK).

According to the Saudi Gazette, “Former White House Director of Public Liaison Linda Chavez opening the Grand Iranian Gathering here said, “Let’s honor and commend the bravery and dedication of Camp Liberty residents. We all know that Camp Liberty came under heavy missile attacks on July 4th, which left vast destruction and dozens of injuries.  The Mullahs perpetrating this attack showed that what threatens them the most and what are they afraid of the most. Therefore let’s make it clear to the mullahs that nothing can and would prevent the Iranian Resistance from forging ahead for democracy and freedom in Iran.  The only method to establish democracy in Iran and establishing relations with the Iranian Resistance led by Maryam Rajavi, said Chavez in prelude to this grand gathering.”  Chavez went on to decry the execution of more than 2,500 people in Iran under the tenure of Iranian President Hassan Rouhani.

The Gazette went on to report that US Sen. John Boozman, in a letter addressing his ‘friends’, there, said that “he was ‘disturbed’ by the growing number of human rights violations in Iran and by the plight of the Iranian Resistance members in Camp Liberty.”  Camp Liberty suffered a missile attack on July 4, injuring many of the unarmed residents of the PMOI or MeK.  Sen. Boozman is a member of the Iran Human Rights and Democracy Caucus.

The United States Congressman, Brad Sherman, veteran of the Foreign Affairs Committee of the House of Representatives, has spoken about the importance of the Free Iran rally. He also congratulated the PMOI for “the critical role it played in exposing the Iranian regime’s nuclear weapons program.”

An Italian Member of the European Parliament, Patrizia Toia, declared that she “desires to encourage everyone to join the event in Paris.”

At the venue’s main entrance, Coaches lined up as international dignitaires began arriving during the early hours of the morning. Huge crowds waited at the gates France’s famous Bourget hall, and once Le Bourget opened, thousands of Iranians poured in.

There is also a great number of Syrian exiles, who oppose the regime of Bashar al-Assad, attending the rally. They denounced Iran’s support to Assad in the massacre of their countrymen.  They stand against a common enemy:  the regimes of the mullahs and Bashar Assad.

“Throughout the three years of Rouhani’s presidency, some in the West have maintained hope that it would herald an era of moderation and reform in Iran,” says former Iranian ambassador to Sweden and Norway, and representative of NCRI in Nordic countries, Perviz Khazaii.

Sadly, the facts show that the human rights situation is only deteriorating. 2,400 executions have been carried out in Iran in just under three years, and many of the victims were political dissidents, most notably the activists of the PMOI.  The Iranian regime carried out at least 21 hangings in a shocking 48-hour period during the second week of May. In its annual report, Amnesty International underscored that Iran has the highest number of executions per capita.

“Despite the persistent danger, I remain active in the NCRI to this day,” said Khazaii. “I am no stranger to diplomatic relations. I was one of three senior Iranian diplomats who resigned from our ambassadorships in protest against an unbridled wave of executions in Iran in the early 1980s and joined the National Council of Resistance of Iran, led by Mrs. Maryam Rajavi. Doing so came at great personal cost. Two of us were gunned down in broad daylight in Geneva and in Rome by terrorists dispatched from Tehran, the first in 1990 and the second in 1993. I am the sole survivor.”

Kerry Meeting With Iranian FM With Deadline for Nuclear Deal

Iran claims it has 5,000 machines to produce enriched uranium

Daily Telegraph: Iran has claimed that its nuclear programme...