Newt Gingrich: There are no moderates in the Iranian regime 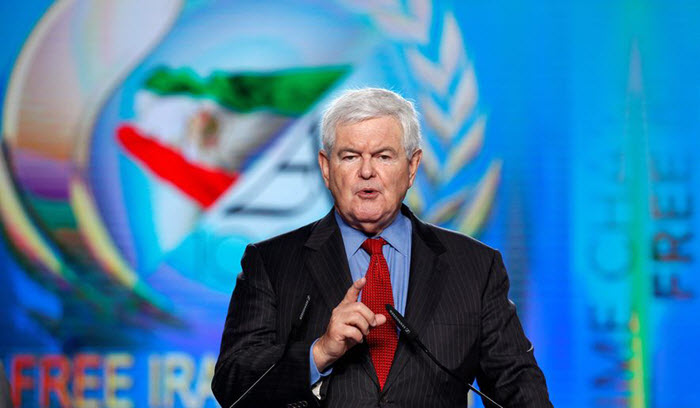 London, 14 Jul – At the Iranian Resistance rally in Paris last weekend, former speaker of the US House of Representatives Newt Gingrich pledged his support to the main opposition coalition National Council of Resistance of Iran (NCRI), headed by opposition leader Maryam Rajavi.

The former Georgia Republican representative spoke of the powerful symbol the rally provided to those suffering under the regime and said it was an honour to follow Prince Turki bin Faisal Al Saud’s speech.

Gingrich, a Republican presidential candidate in 2012 and prospective Vice President for Donald Trump, said: “There are no moderates in the dictatorship. The dictatorship cannot be trusted. The agreement made with it is insane. Giving money to the leading state sponsor of terrorism makes no sense, and every single day, when they rejected the U.N., the dictatorship has said to the West, “We’ll sign anything you want. It just has no meaning. Give us the money.” They have methodically outmanoeuvred the diplomats of the United States and European countries.”

He said that the West had a moral obligation to support and encourage the Resistance. This support, he said, would make a difference and the persistence of the support would turn the tides of history.

He said that he would take back the message of commitment and support to America so that they knew there were “thousands and thousands of Iranians who are prepared, who are ready, who are committed and who believe that we can truly bring democracy to Iran”.

By Pooya Stone The US Department of State's website...