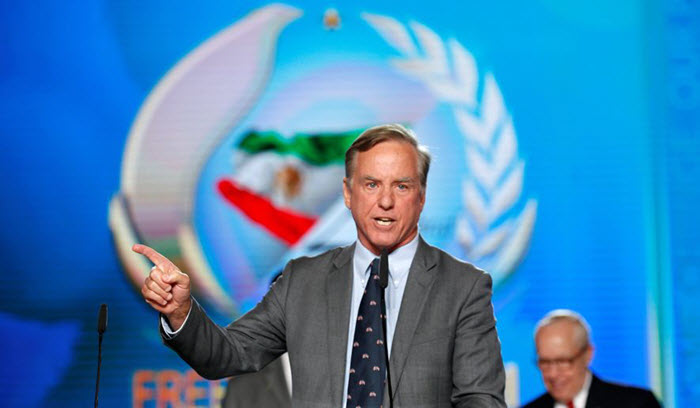 Howard Dean, the former Governor of Vermont, was one of many bipartisan US politicians at the event.

In his speech he lauded the efforts of Maryam Rajavi, president-elect of the National Council of Resistance of Iran (NCRI), and other members of the Resistance for coming together to fight the regime. He stated that Rajavi’s 10-point-plan was something that Western countries wanted to see implemented in Iran, with the introduction of a secular government.

Dean, the former chairman of the Democratic National Committee, thanked the State Department for its progress on the matter of Iranian dissidents in Iraq but also criticized them for not going far enough, and failing to protect the Camp Liberty residents from the rocket attacks on 4 July. Camp Liberty houses members of the main Iranian opposition group People’s Mojahedin Organisation of Iran (PMOI or MEK).

Dean, a medical doctor, spoke of the cruelty of the regime towards its own citizens and the danger it poses to the security of the Middle East.

He said: “Not only have they murdered 2,500 of their own people in the last three years under the supposed moderate Rouhani, but they have helped murder 250,000 Syrian civilians by supporting the Butcher of Damascus, Bashar al-Assad. And let me remind my Americans at home that this is not just a matter of something that is going on in Iraq or Iran…. Rafsanjani and Khamenei were in the room when the decision was made by the Iranian intelligence community to blow up the Jewish centre in Buenos Aires in Argentina. These people are war criminals and they should be treated as war criminals”.

Reuters: Britain and France plan to introduce on Monday...

Ahmadinejad in flap over wearing of ties in Iran