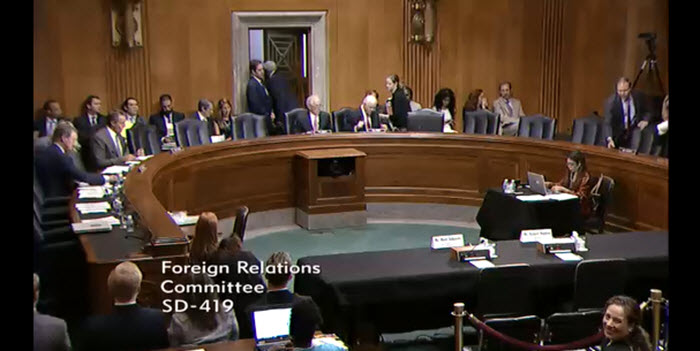 Iran Focus
Washington, 18 Jul – The United States’ Senate Committee on Foreign Relations voted unanimously last week to back a resolution regarding the rights of Iranian exiles living in Camp Liberty in Iraq.

The exiles are members of Iranian opposition group, the People’s Mojahedin Organization of Iran (PMOI or MEK), who have been designated a protected group of people by the United Nations for the discrimination and violence that they face.

This resolution was passed following a rocket attack on the camp, on July 4, which injured more than 40 people. The attack, carried about by proxies of the Iranian regime, followed an 8-day blockade of food, clean water, and medical supplies entering the camp.

Senator John McCain, the Republican presidential candidate for 2008, submitted the text of the resolution to the Senate committee at the July 14 session, led by Senator Bob Corker.

The resolution, known as “S. CON. RES. 42”, was supported by Democratic senators Ben Cardin and Jeanne Shaheen from Maryland and New Hampshire respectively.

New Jersey Senator Bob Menendez, Democrat, said: “I appreciate that we are moving the Resolution calling on the Government of Iraq, the United Nations, and the United States government to commit to expediting a workable resettlement process for the people of Camp Liberty. We are reminded of the danger they face, just this past 4th of July, when attacks were once again upon Camp Liberty, as a reality of everyday life there.”

He continued: “It is the United States when we invaded Iraq that went to the MEK and said that we want you to give up your weapons and in return, we will guarantee you your security. Well, they did that and much more. They gave us information about Iran’s nuclear program, they have continued to do so. And yet we have not, from my perspective, done what is necessary to secure the guarantee that we gave. I hope that this resolution moves it forward so that they could be resettled safely outside of Iraq and continue to enjoy the freedoms of liberty.”

In May, the U.S. House of Representatives Foreign Affairs Committee approved Floor a similar bipartisan resolution calling for “safety and security” of Camp Liberty residents.