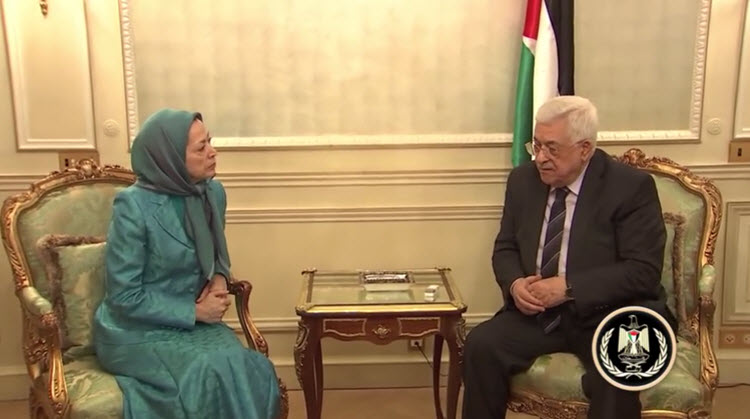 London, 2 Aug – Fatah responded Monday to the remarks of an Iranian Foreign Ministry official on the meeting between Palestinian President Mahmoud Abbas and the President-elect of the National Council of Resistance of Iran (NCRI), Maryam Rajavi.

Hossein Sheikholeslam, an adviser to Mohammad Javad Zarif, the Foreign Minister, said Sunday, “That a Palestinian faction that compromises with the Zionists (Israelis) and that has yielded to Israel under US pressure… today meets with terrorist elements is no surprise.”

Fatah’s Information and Culture Commission issued a statement on Sunday. Fatah said Hossein Sheikholeslam “is part of the Iranian regime’s establishment which strives for death, destruction, civil war and sectarian discord in every Arab country where it has managed to reach.”

The regime’s actions, the statement said, are “against the national interest of the Iranian people.”

The statement reminded Iran of the many times President Abu Mazen has had “outspoken disagreements with the U.S. administration.”

Fatah accused the Iranian regime of “organized slurs against the head of the Palestinian people and the commander of the National Liberation Movement of this nation and against the Palestinian cause.” Iran, the statement said, used Palestine for “the development of their influence in the region.”

“We continue to be a national liberation movement that strives for freedom and independence. And so we must strengthen our relations with all forces in the world who believe in and struggle for the goals of freedom and building a free and democratic society based on justice,” Fatah asserted.

AFP: The head of Iran's Revolutionary Guards said on...