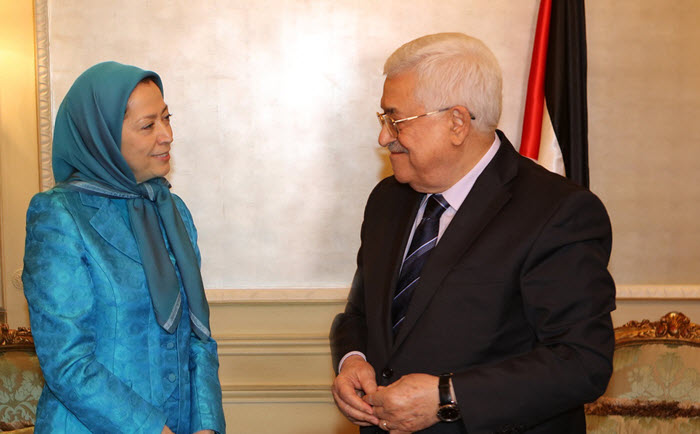 Iran Focus
London, 4 Aug – Iran is trying “to ease tension” with the Palestinians following derogatory remarks made by Iranian officials about the meeting between President Mahmoud Abbas and the President-elect of the National Council of Resistance of Iran (NCRI), Maryam Rajavi, reported Asharq Al-Awsat, the influential Arabic newspaper.

A Fatah official told Asharq Al-Awsat that the regime had tried to contain the crisis by sending a letter to close down the dispute. “Their ambassador to Paris has met with the Palestinian ambassador for this end,” he said.

Iranian Foreign Ministry Advisor, Hussein Sheikh al-Islam, had said on Sunday that President Abbas was “a collaborator” of the CIA. The Secretary of Iran’s Expediency Council, Mohsen Rezaei, said on Monday that Abbas was incompetent. Iran had not only attacked Abbas, Asharq Al-Awsat reported, but had also asked its Palestinian allies to join the campaign.

The newspaper also reported that the NCRI’s Chair of the Foreign Affairs Committee, Mohammad Mohaddessin, when asked about the regime’s accusations of collaboration with Israel said, “Tehran used to buy weapons from Israel during the Iran-Iraq War.”

Mohaddessin went on to say that Iran had sent 80,000 members of its armed forces to Syria, and that terrorists linked to the regime were guilty of “the ugliest crimes in several regional countries, including Bahrain.”

Fatah told Asharq Al-Awsat that, while it had no wish to prolong the crisis, there must be an apology from Iran. Palestine Liberation Organization Secretary General, Saeb Erekat, said that the Palestinian leaderships would not remain silent vis-à-vis the Iranian insults. Sources also told Asharq Al-Awsat that during their meeting, the Palestinian ambassador asked Iran to officially apologize for attacking Abbas.

Ex-premier is expelled from governing party in Iraq

New York Times: In a shakeup at the top of...

The Suicide Tsunami in Iran