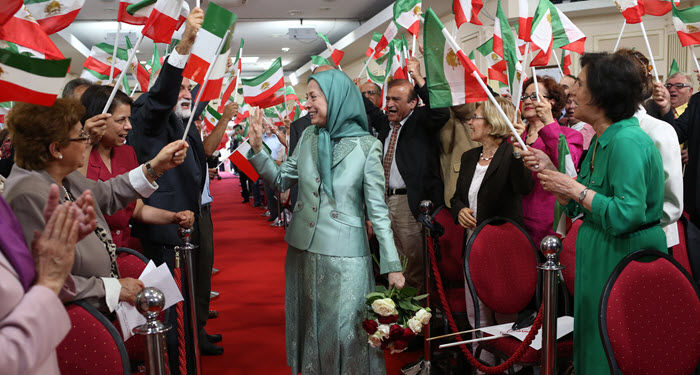 London, 12 Sep – The National Council of Resistance of Iran (NCRI) headquarters was filled with celebrations following the successful relocation of Iranian Resistance members to safety in Europe.

A ceremony was held on Saturday, September 10, in their Paris office with French, European and Arab dignitaries, to commemorate the safe relocation of the People’s Mojahedin of Iran (PMOI/MEK) members to Albania.

Maryam Rajavi, the president-elect of the Iranian Resistance, heralded this as a major setback for the totalitarian regime. Indeed, Ahmad Jannati, head of Iran’s Assembly of Experts and the regime’s Council of Guardians, has said that the PMOI would have uprooted the regime given enough time.

She said: “In these 14 years, thanks to the endurance of the PMOI and its members in Ashraf and Camp Liberty, and relentless political and international campaigns, the clerical regime’s schemes to destroy and annihilate the Iranian Resistance were thwarted. The Iranian people’s movement for freedom thus took a substantial step forward against the clerical regime. The regime’s plan to guarantee its own survival with the physical elimination of the PMOI/MEK was foiled.”

Rajavi added: “The regime ostensibly wanted to expel the Mojahedin from Iraq and to send them away from the Iranian border. Still, the mullahs’ real demand was their annihilation or their surrender to the mullahs’ rule. The fake arrest warrants issued by the Iraqi judiciary, the extradition schemes and the red notices passed on to Interpol, sought to pave the way for the same purpose.”

She credited the PMOI with endurance in the face of certain death and said that their bravery had kept the fires of justice burning. She admits that the fight for justice is not over, but rather just beginning.

The dignitaries in attendance included: Alejo Vidal-Quadras, President of the International Committee in Search of Justice (ISJ) and former Vice President of the European Parliament; Madam Annisa Boumediene, Expert on Islam and former First Lady of Algeria; Tahar Boumedra, former Chief of the Human Rights Office of the UN Assistance Mission to Iraq, and in charge of the Case in Ashraf; Mr. Jean-Pierre Muller, mayor of Magny-en-Vexin and head of the Committee of mayors against fundamentalism and for human rights; Pierre Bercis, President of the New Human Rights Foundation, and Sheikh Dahou Meskine, Secretary General of the Joint Committee of Muslims against Fundamentalism and for Human Rights.

Reuters: The United States called on Turkey and other...