Sanctions on Iran Regime Extended for the Next Decade 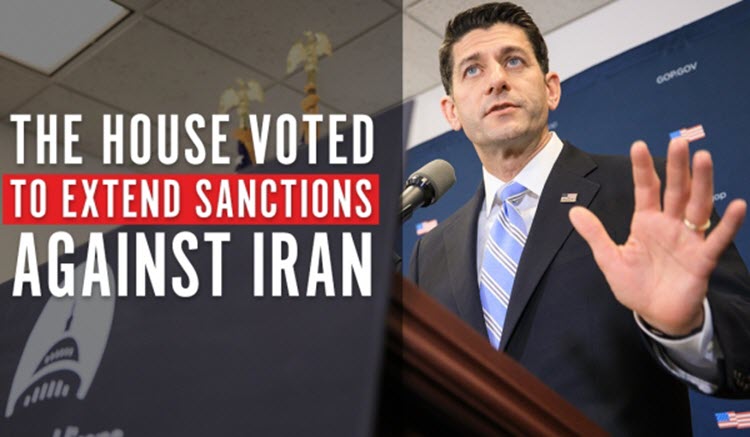 London, 17 Nov – The US House of Representatives has voted to extend the American sanctions on the Iranian Regime for the next decade.

Proponents of the sanctions have called them critical to ensuring that Iran complies with the nuclear agreement.

The Iran Sanctions Extension Act will need to pass through the Senate and get signed by President Obama before the current sanctions expire at the end of 2016.

Some economic sanctions were lifted in January per the 2015 nuclear agreement but these sanctions could also be re-imposed in Iran violates the deal.

Iran claims that these non-nuclear sanctions, particularly those banning access to the American financial system, have discouraged foreign investment and not providing the financial rewards that Iran expected.

The nuclear agreement attracted wide bi-partisanship criticism with the Iranian Regime being seen as untrustworthy and having gained too many concessions during the deal.

Donald Trump, who criticised the Iranian agreement during his presidential campaign, vowed to rip it up. Considering how many campaign pledges he’s walked back since being elected, it is unclear whether he will change his mind on this; especially as the other countries on the agreement- Britain, China, France, Germany, and Russia- have claimed they will honour it and 76 national security experts have pleaded with Trump to accept the deal in order to ease tensions.

Hassan Rouhani, the Iranian President, even stated that the agreement could not be overturned by one country.

However, the Weekly Standard said that Trump must enforce the provisions of the deal regarding the breaches by Iran.

Iran has consistently breached the agreement, with its overproduction of nuclear materials, its nuclear missile tests and as such, should be brought to task and made to account for its actions.

We must encourage Trump to punish Iran for its constant violations of the deal, and encourage the international community to hold Iran to account over its human rights abuses.

Human Rights Watch: The arrest of journalist and internet...