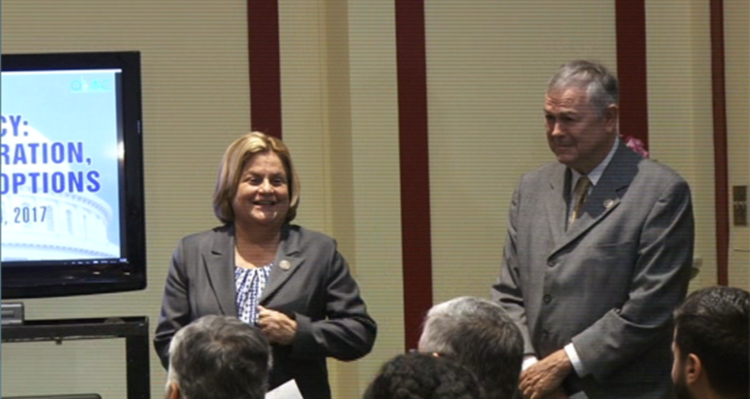 London, 31 Jan – A bi-partisan group within the US Congress has promised the Iranian Resistance that they will fight for tougher sanctions on the Iranian Regime, even if they have to fight Donald Trump.

Trump had previously promised a tough stance on Iran but, as of yet, he has not come through on that.

The Republican and Democratic House members made this pledge to the Organization of Iranian-American Communities (OIAC), a group which is allied with the Iranian dissident movement Mujahedin-e-Khalq or MEK.

The OIAC advocates a “democratic, secular and non-nuclear government” in Iran. It supports the MEK and its French-based partner National Council of Resistance of Iran (NCRI), who seek to “overthrow” of the “religious dictatorship” in Iran.

OIAC political director Majid Sadeghpour said that he and the OIAC were looking forward to working with Trump and Congress to build a “successful policy” toward Iran, which he called “arguably the greatest threat to U.S. national security”.

She said: “It is the time that we put the tools that we have created to use, broadening our sanctions so that they include IRGC-controlled businesses and subsidiaries. We must target the (Iranian) regime at every turn, not only enforcing the sanctions that have been too long neglected, but expanding their scope whenever and wherever possible.”

Another cause for sanctions may be IRGC-affiliated companies buying American-made jets, when Iran has in the past used commercial planes to transfer money, weapons and military personelle to other terror groups, like Hezbollah.

Democratic Congressman Brad Sherman has co-sponsored a bill which would require the Trump Administration to report any signs of this type of “illicit military or other activities” which violated the sanctions relief.

Sherman said: “We need an ironclad system that makes sure (any newly-acquired planes with American technology) are not used for military or terrorist purposes (by Iran).”

He said: “One strategy is to help pro-democracy movements who would replace the mullahs.”

Democratic Congressman Eliot Engel said he wanted to focus on helping the MEK dissidents who have been relocated to Albania, after constant attacks by the Iranian Regime and its proxies in Iraq.

He said that the 3,000 people who were forced to leave in fear of their lives, deserved the money from the assets they have to leave including their property. It is estimated that this is roughly $550 million.

He said: “We want the Iraqi government to sell these properties and return the money to MEK members. It’s very important,” he told the gathering. “As all of their expenses in Albania are paid by MEK, they need their money to be returned as soon as possible. So I urge Iraq, which the United States has helped for so many years, to honour its commitment to return the money to MEK.”