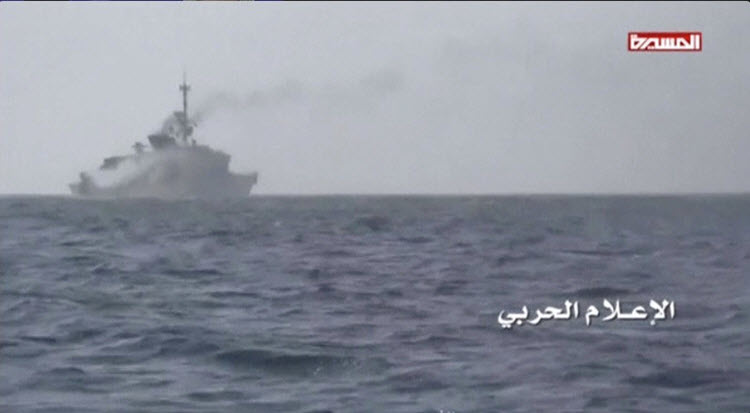 London, 31 Jan – On January 31 Yahoo reports in an article by Mohammed Ghobari and Ali Abdelaty, that on Monday, three armed Houthi boats attacked a Saudi warship off the western coast of Yemen. Saudi state news agency SPA reported that the explosion killed two crew members and injured three others.

According to the group’s official news channel al-Masira, the Houthis claim that they launched a ballistic missile at a Saudi-led coalition military base on the Red Sea island of Zuqar on Tuesday morning. It is still unclear if there were any casualties.

There was no immediate coalition reaction to the Houthi’s claim.

These attacks show an escalation to the combat on Yemen’s western coast between the Iran-allied Houthis and the coalition that is backing Yemen’s internationally recognized government.

The Saudi-led coalition fighting in Yemen said in a statement on SPA,  “A Saudi frigate on patrol west of Hodeidah port came under attack from three suicide boats belonging to the Houthi militias.”

One of the boats collided with the rear of the vessel, and caused the explosion that killed the two crew members and wounded three others.

However, the Houthi movement’s al-Masira channel contradicted this account, and quoted a military source as saying the explosion was caused by a guided missile.

This was the second attack on ships in the last six months by the Houthis, off the coast of Yemen.

The Houthi’s are engaged in battles on the mainland with coalition troops and pro-government fighters, who are trying to advance northward and drive the Houthis away from the Red Sea ports.

The Saudi-led coalition warned that this attack “would impact international navigation and the flow of humanitarian assistance to the port for Yemeni citizens.”

In a campaign to try to restore the ousted administration government of President Abd-Rabbu Mansour Hadi, Saudi Arabia and its Gulf Arab allies have carried out thousands of bombing raids in Yemen since March 2015.

In another Yahoo News article by Mohammed Ghobari and Ali Abdelaty on January 30, 2017, they report that the three crew members who were injured are in a stable condition, and that the fire was put out by crew.

The Iran-allied Houthi group that controls Yemen’s capital claimed responsibility three attacks carried out on ships off the coast of Yemen in the last six months.

A military official was quoted as saying to the Saba Yemeni news agency, run by the dominant Houthi movement, “The Saudi warship was involved in aggression against western coastal cities and Yemeni fishermen.”

A building in southern Saudi Arabia, used by United Nations staff to monitor ceasefire violations in Yemen, was damaged by cross-border rocket fire on Monday.

Also in October, a Saudi-led force rescued passengers from a vessel being used by the United Arab Emirates military that was attacked by Houthi fighters in the Bab al-Mandab strait, a strategic Red Sea shipping lane.

The U.S. Energy Information Administration says that more than 3.4 million barrels of oil passed through the 20 km (12 mile)-wide Bab al-Mandab each day in 2013.

Since March 2015, Saudi Arabia and its Gulf Arab allies have carried out thousands of bombing raids in Yemen, as part of a campaign to restore the ousted internationally recognized government of President Abd-Rabbu Mansour Hadi.

Iran lays its cards on the table

We are starving: Iran workers chant outside Ministry of Labour