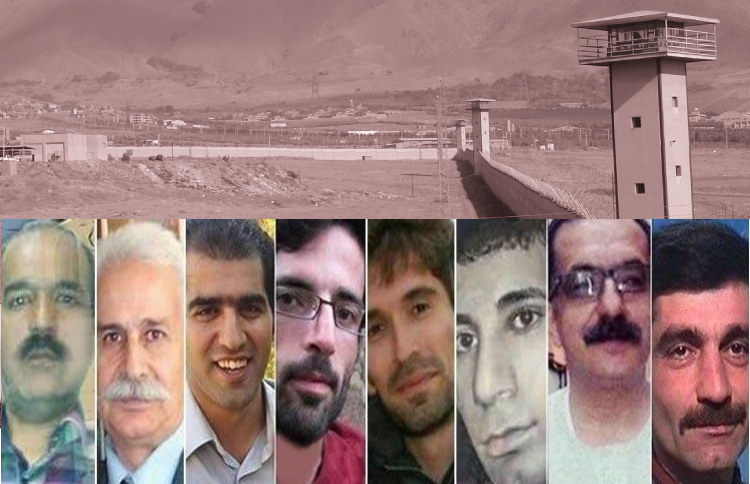 In an open letter, several political prisoners called on the people to boycott the Iranian regime’s sham elections. While many “politicians” have succumbed to the will of the supreme leader Ali Khamenei, these brave people insist on their oath for achieving freedom and democracy to Iran.

These dissidents are held in the Rajaei Shahr Prison (Gohar Dasht), in the city of Karaj, about 20 km west of Tehran. The facility is considered one of Iran’s most infamous prisons and many political prisoners from the notorious “Evin” who persist in their beliefs are often transferred to Rajai Shahr prison. The interrogators pursue to break the spirit of the prisoners by employing physical and psychological tortures.

One of the interrogators is called Mahrami who was transferred to Rajaie Shahr around two years ago from Evin Prison’s ward 209, run by the Ministry of Intelligence. He sees all political prisoners as traitors and infidels and believes that they should all be “tortured to death.”

“Voting means endorsing the continuation of poverty, discrimination, corruption, suppression, and prison, and extending the use of gallows and execution and promoting the export of terrorism.

“Since the beginning, elections have been part of democracy; an invention for humankind to create the possibility of public participation in power and political decisions to build a fairer and better world… And voters, who are generally the people, they are noble. And the select group that should be only the spokespeople, representatives and defender of people [’s rights] … The representatives have been elected to listen to the people’s cries and will… Not the will of the [supreme leader] and the ruling system… Choice only exists where there is no religious tyranny. Where there’s a tyranny of any kind, there’s no choice.

“[the regime’s president Hassan] Rouhani himself frankly said that ‘this is not an election, its selection…’ However, he now says that ‘don’t get angry with the ballot box and be sure to participate. He counts showing the ‘national grandeur,’ ‘national security,’ and ‘resistance against enemy,’ as the necessary reason for participating in elections… In this context, the only things that don’t matter are the people’s grievances and establishing popular sovereignty.

“This means that [the mullahs] only pursue to drag more people on the ballot boxes to display the world they are supported by the people and enjoy legitimacy… However, they use this ‘huge participation’ as a means for more suppression, more execution, and strengthening their [illegitimate] rule… The [rulers] themselves reject [this show] and describe it as an appointment… Why?

“Now, the [so-called reformists], who were living in their palaces and turning a blind eye to the people’s difficulties, order the people to actively participate and not get angry with the ballot box.

“Actually, which ballots? Must the people vote for plundering and embezzlement? Which person could ever be nominated except the [supreme leader]‘s [political] slaves? Which ‘representative’ defended the people’s rights and grievances so far? They all gave their lip service and flattery to [Khamenei] alone!

“In November, didn’t they see the bloody flagstones of the streets that were colored with the blood of people who have flooded to protest and obtain their rights? Didn’t they hear?

“Who was eventually the culprit of killing more than 1,500 Iranian citizens and youths? Who shot the people of Mahshahr, Ahvaz, Shahryar, Karaj, Shiraz, Kermanshah, Quds district, Saveh, etc.? Where have they transferred more than 10,000 detainees and what is their fate? Why didn’t [officials] announce the number of martyrs in November?

“Which so-called representative followed this essential demand of the people and what was the result? When the fed-up people were described as foreign elements, rioters, etc., which one of the members of the parliament account them as his [voters] and defended them? What was the result? And…

“Participation in the regime’s sham elections and voting for any faction, gang, and each individual either reformist, moderate, or principlist is synonymous with ignoring the blood of our sisters and brothers who were killed by this regime in January 2018 and November 2019. It is also accounted for endorsing all the regime’s crimes and continuation of poverty, discrimination, corruption, depravity, inflation, high prices, suppression and prison, and extending the use of gallows and execution and promoting the export of terrorism.

“Therefore, we as a group of political prisoners in Gohar Dasht prison believe that no freedom-loving and honorable Iranian will endorse [the crimes] and close their eyes to the blood of innocent people and violate their human rights by participating in the sham elections.

Rivals challenge Clinton on her vote for Iran measure