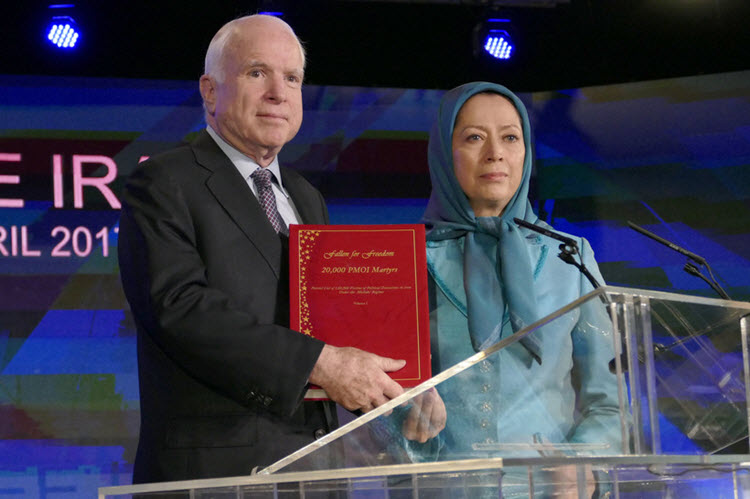 London, 18 Apr – Senator John McCain (R-AZ), Chair of the Senate Armed Services Committee, praised members the Iranian Resistance for standing up for freedom at a conference in Albania, earlier this month.

He also explained how the Iranian regime, Bashar Al-Assad and Daesh (ISIS) were all intertwined.

The conference celebrated the one year anniversary of the safe escape of Resistance members from Iraq’s Camp Ashraf, where they were routinely attacked by the Regime, to Albania.

While there, McCain met with the leader of the Iranian Resistance, Maryam Rajavi, and discussed with her the Iranian Regime, its role in the Middle East and plans for the future. He praised her leadership and told her that he also hoped for a free Iran.

He said: “Someday, Iran will be free. Someday, we will all gather in that square.”

This has, of course, drawn criticism from the Iranian Regime; with Iran’s Foreign Ministry spokesman Bahram Qassemi threatening that the US would pay for this mistake.

This really emphasises the need for the international community to work with the Resistance.

The Regime is embroiled in infighting, dogged with corruption, and dedicated to the eradication of any sort of opposition to its maniacal rule. If they were a functioning government, they would not be threatened by a US Senator talking to their opposition.

Dr Majid Rafizadeh, a leading political scientist, wrote in the Huffington Post: “It is critical to point out that Iranian leaders fear the soft power of oppositional groups more than the military and hard power of foreign governments.

That is why Iranian leaders and media outlets have reacted forcefully and anxiously to this visit. Iran’s oppositional groups can be a very powerful tool to counterbalance the Islamic Republic.”

In her speech to the conference, Rajavi said: “[The Iranian Resistance is] more determined than ever to establish freedom and democracy in Iran. As the regime is beset by deepening crises, we are closer than ever to achieving our goal…From all indications, the clerical regime is at an impasse socially, politically, and economically and as such is quite vulnerable. The Iranian people and Resistance are more determined and prepared than ever to overthrow the ruling theocracy and establish democracy and popular sovereignty in Iran.”

Earlier this year, a bi-partisan group of 23 senior former US officials, wrote a letter to Donald Trump, imploring him to work with the National Council of Resistance of Iran (NCRI) in order to see peace in the middle east.

Signed by the likes of Rudy Giuliani, Joseph Lieberman, and Patrick Kennedy, this history-making letter advised that Iran has worked to damage the US and its foreign policy, since 1979 and that a new strategy was needed.

The letter read: “[George. W.] Bush publicly credited the resistance [with exposing Iran’s nuclear programme in 2002]. It is time to end the fundamentalist regime’s undue influence over US policy and establish a channel of dialogue with the NCRI, as many other governments have done, consistent with the longstanding US diplomatic practice of dialogue with political opposition groups worldwide.”

AFP: At least three days would be needed to...

No Compromise on Iraq’s Authority

On Tuesday, President Obama delivered a warning to the...