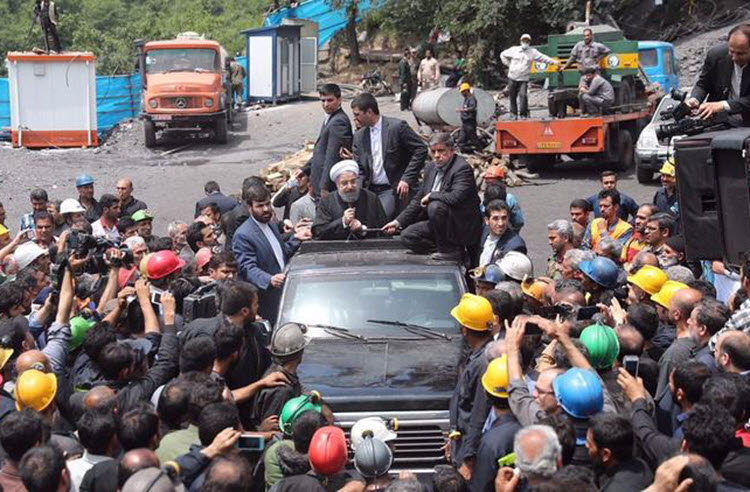 London, 8 May – Following last Wednesday’s deadly mine explosion in Golestan Province, the Iranian President Hassan Rouhani finally saw fit to visit the city, on Sunday, during his re-election campaign tour.

However, Rouhani was met by protesters who were angry that safety concerns had not been addressed prior to the explosion which killed dozens of miners and angry that Rouhani had not appeared beforehand.

The miners, who were still covered in coal soot after searching for their still-missing colleagues, began to assault the armoured SUV as it passed through. The car, which was undamaged, did not stop, proceeding to drive through the crowd and sped away down a hill.

Rouhani went to the Zemestanyourt mine to speak to the miners and their families. In his speech, he insisted that that the government was responsible for the lives of mine workers; however, given the upcoming election, it is likely that this is all spin.

He said: “Be sure that we will pursue this issue and also your demands. Those who are guilty in this incident should be prosecuted by a court.”

However, miners had previously raised safety complaints with the mining company which is owned by the Bassij, associated with the Revolutionary Guards Corps (IRGC), which is itself a part of the Regime. Their complaints were ignored and, in some cases, led to violence against the person who raised the issue.

One worker said: “A few years ago when I filed a complaint in Azadshahr’s court, they beat me up…”

If the Regime were unwilling to listen before, why are they promising prosecutions now?

A sibling to one of the fallen mineworkers said: “Where was he a few days ago? Has he come to collect votes for himself? I want my brother back.”

At least 35 people have been killed in the mine explosion, with 22 bodies recovered and more yet to be found.

It is believed that lax health and safety laws and inadequate emergency services are to blame.

Since the 2015 nuclear deal, which lifted sanctions on the Gulf country, Iran has been renovating its mines in an attempt to score business contracts but these renovations have been less focused on improvements and more focused on increased production.