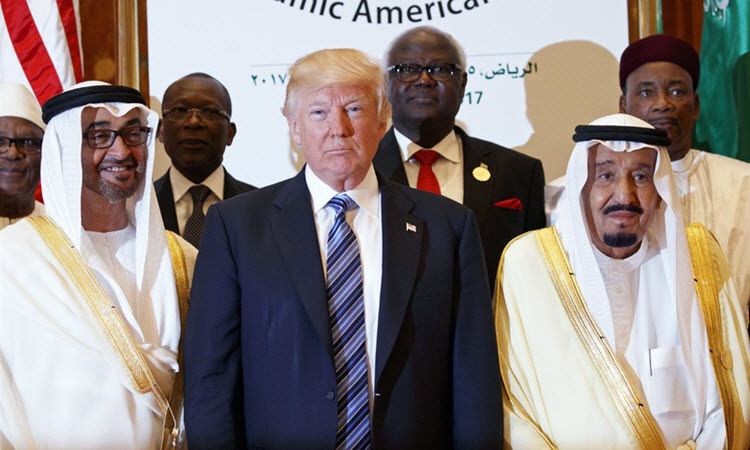 London, 22 May – Donald Trump accused Iran of fuelling the “fires of sectarian conflict and terror” in the Middle East, during a speech on Islam in Saudi Arabia on Saturday.

Trump, who is on his inaugural foreign visit, gave this speech to the Arab Islamic American Summit in Riyadh, one day after Iranian President Hassan Rouhani was‘re-elected’ to serve a second term.

Trump said: “From Lebanon to Iraq to Yemen, Iran funds, arms, and trains terrorists, militias, and other extremist groups that spread destruction and chaos across the region. For decades, Iran has fuelled the fires of sectarian conflict and terror.”

He criticised Iran for allowing terrorists a “safe harbour, financial backing, and the social standing needed” and their role in the Syrian Civil War, helping dictator Bashar al-Assad to destroy his own people.

He continued: “Until the Iranian regime is willing to be a partner for peace, all nations of conscience must work together to isolate Iran, deny it funding for terrorism, and pray for the day when the Iranian people have the just and righteous government they deserve.”

Trump’s blunt criticism of the Iranian Regime is seen as a vast contrast to former US President Barack Obama, who helped negotiate the 2015 nuclear deal between the US, Iran, and five other world powers.

While the criticism has been welcomed by both Saudi Arabia and Israel (where Trump arrived on Monday), Trump has so far failed to renegotiate the nuclear deal, which he called “the worst deal”.

Although Trump has been right to criticise the human rights violations of the Iranian Regime, he has faced criticism for ignoring similar abuses by the Saudi government.

Trump also rightly characterised the fight against terrorism as not a religious fight.

However, Trump warned that the countries of the Middle East couldn’t wait for the USA to “crush Islamic terrorism”, stating that is not America’s job to “lecture [or] tell other people how to live, what to do, who to be, or how to worship.” This is a strange turn about, given that Trump had just said that terrorism had nothing to do with religion.

While in Saudi Arabia, the Trump administration announced several multi-billion dollar arms and investment deals to the Gulf country.