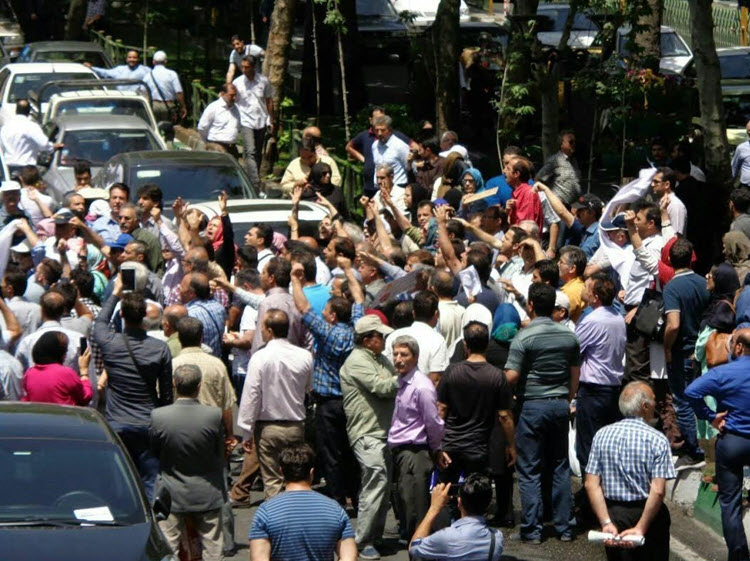 London, 30 May – On Monday, May 29, looted depositors of Caspian, Development and Ideals financial institutions gathered and held a protest in front of the central bank in Tehran, and clashed with police. The protesters at this massive rally blocked Mir-Damad Street in Tehran. Angry protesters also smashed the North gate glass doors of Iran’s central bank, and they aimed to enter the bank.

Tasnim State affiliated news agency said, “Caspian depositors have been shrouded, and have come to Mir-Damad Street from across the country today. The demonstrators were chanting:

‘Investment security is our inalienable right;

Unworthy managers should be fired.’”

On Sunday, May 28, the Lanterns (Fanous) reports also stated Depositors of Development/Ideal institutes, after being promised by the institutions to return their funds, were faced with no brokers in branches in different cities of Lorestan province, including Khorramabad. Depositors gathered in front of the branches of these institutions several times.

Looted depositors of Development financial institute also gathered in protest in front of the institution in Ilam, West Iran, and demanded their looted assets from above mentioned institute, which does have its operation permit from Iran’s central bank.

Looted depositors of Development Institute in Babol (north of Iran) also held a protest rally in front of the branch of the Institute demanding the return of their deposits on the same day.

Some depositors of Development Institute in Ramhormoz city, Khusitan province, staged a protest rally by lining up their motorcycles, and blockading the street in front of the local governmental office on Sunday, May 28.

AFP: A tribunal set up by victims of political...