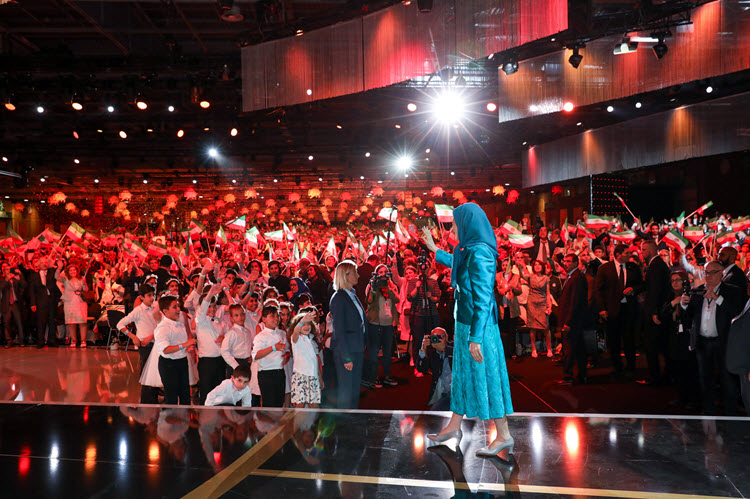 London, 4 Jul – This weekend, speakers at the Free Iran gathering called for the expulsion of the Iranian Regime from the Middle East and aired their support for the Iranian Resistance and its president, Maryam Rajavi.

The annual rally, organised by the National Council of Resistance of Iran (NCRI), attracted over 100,000 people, including politicians and activists, who called for an end to the Iranian Regime and freedom for the Iranian people.

The main themes of the Free Iran Gathering was that regime change in Iran was not only inevitable, but that it was more immediate than most people thought.

Human rights activist, Heshmat Alavi, wrote on the Saudi Gazette: “Iran has been suffering a series of setbacks following last month’s Riyadh Summit. Couple that with the Trump administration continuing to evaluate its comprehensive Iran policy, the mullahs in Tehran have every reason to be extremely concerned about how the bleak the future is.”

Maryam Rajavi, the keynote speaker for the Free Iran Gathering, said: “Our people want a constitution based on freedom, democracy and equality. The time has come for the international community to heed the demands of the people of Iran.”

The Free Iran gathering was also quick to showcase that the biggest victims of the Iranian Regime were in fact the Iranian people who are subjected to human rights abuses imprisonment for criticising the government and execution based on political belief.

Prince Turki Al-Faisal of Saudi Arabia, said: “The Iranian people are the first victims of Khomeini’s dictatorship. Your effort in challenging this regime is legitimate and your resistance for the liberation of the Iranian people of all ethnicities, including Arabs, Kurds, Balochis, Turks and Fars of the mullahs’ evil, as Mrs. Rajavi said, is a legitimate struggle.”

It also called on the international community to recognise the legitimacy of the Resistance as the force that represented the Iranian people.

Rajavi explained that the Resistance has been opposing the Iranian Regimes destructive influence for nearly 40 years.

She said: “Out of the past 38 years, the mullahs were engaged in war with Iraq for eight years, have been at war with the people of Syria for six years, and have pursued confrontation with the international community for more than ten years to build an atomic bomb. The Iranian Resistance is proud that it has stood up to the mullahs’ religious fascism in all these three spheres: It has been the flag-bearer of peace and freedom; it has been a vanguard in defending the people of Syria, and it has led the way for a non-nuclear Iran.”

The rally also condemned Irans interenference in other nation states, which shows clear attempts to destabilise the Middle East, and recognised that the Iranian Regime is the main obstacle to peace in at least four countries, including Syria and Iraq.

Rajavi said: “We have welcomed the statements made at the Arab, Islamic, American Summit in Riyadh against the Iranian regime’s terrorist and destabilising activities. Nevertheless, we emphasise that the ultimate solution to the crisis in the region and confronting groups like ISIS, is the overthrow of the Iranian regime by the Iranian people and Resistance.”

Former New York Mayor Rudy Giuliani, said: “You, I, my government and your leadership, we see Iran in exactly the same way. The regime is evil and it must go. Free Iran.”