New US Policy on Iran to Coincide With Rouhani UN Speech? 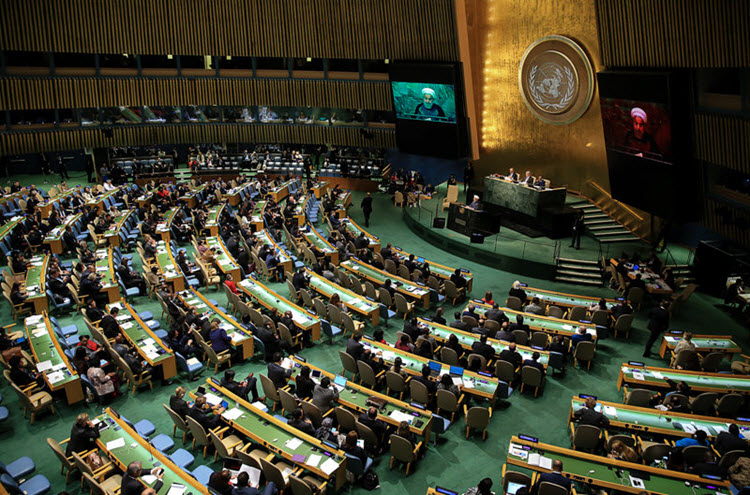 London, 19 Sep – Donald Trump has certified Iran as compliant with the 2015 nuclear agreement twice since taking office, despite clear evidence to the contrary and a well-documented disdain for the deal.

However, this may all be about to change when the new US policy on Iran is announced; a policy expected to be much tougher on the Iranian Regime, their ballistic and nuclear weapons programmes, and their many other transgressions.

Many speculate that this policy change will be announced at the end of September, just in time for the quarterly review of the nuclear deal, which is due in October.

If so, the policy announcement will come shortly after Iranian President Hassan Rouhani speech before the UN General Assembly.

Rouhani’s speech, welcomed by those in the West who mistakenly view him as a “moderate” despite a long history of human rights abuses, will no doubt fail to address any of the horrific problems caused by his Regime.

Majid Sadeghpour, the political director of the Organization of Iranian American communities (OIAC), wrote an op-ed for Townhall, entitled “The UN General Assembly: Will New American Policy Finally Challenge Iran?”, in which he addressed that Rouhani was not a “moderate” and that, even if he was, the Iranian Regime is incapable of change because all the power is in the hands of one man.

He wrote: “Even decisions within his immediate purview, like cabinet appointments, Rouhani cannot make independently, without first consulting with the Supreme Leader Ali Khamenei.”

He also spoke about the 1988 massacre, which resulted in the deaths of 30,000 political prisoners in Iran and was just last week addressed by the UN in Geneva and noted the Rouhani would not address this matter or other human rights concerns either.

While Rouhani is speaking before the UNGA on September 20, a protest will be happening outside, led by activists who oppose the legitimisation of a Regime that still executes children, imprisons supporters of other political parties, and beats protesters in the streets.

Sadeghpour wrote: “If the White House is listening, the international reach of these protests should be loud and clear. Activists urge the US to follow suit and help shape international understanding of Iran’s abysmal human rights record – a strategy absent during the Obama administration, yes, but that does not dismiss the fact that Trump’s foreign policy approach to Iran is equally ambiguous and absent, thus far. The world anxiously yet patiently waits for the Administration to make their move. Until then, we continue to hope.”

Last month we faced a very strange claim by...

Iran linked to 1985 bombing at US air base in Germany: report