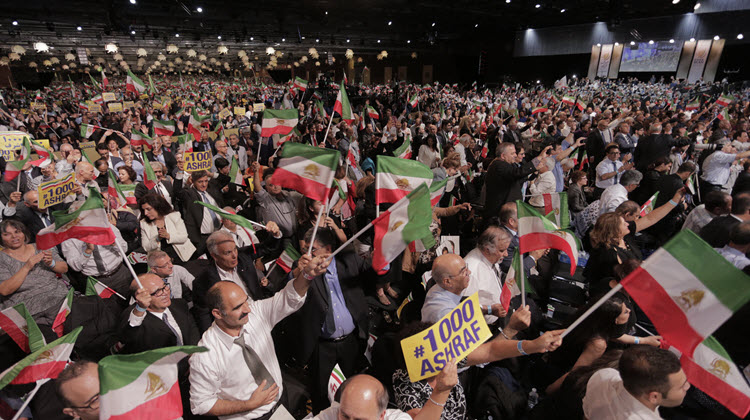 London, 19 Oct – This week the US foreign policy team unveiled its new policy on Iran and measures to address the nuclear deal, formally known as the JCPOA. On October 13th, President Trump laid out the major points of this new policy, which include the decertification of the JCPOA, and designation of Iran’s Islamic Revolutionary Guard Corps (IRGC) pursuant to the global terrorism Executive Order (E.O.) 13224, in his 20-minute speech that marks a major policy change.

After Trump’s speech, the EU expressed its concern over the US abandoning the JCPOA. However, Israel and Saudi Arabia welcomed the new policy toward Tehran.

The Iranian society and community abroad looked for the reactions regarding Trump’s announcement from the regime first, and second from the main Iranian opposition movement, the National Council of Resistance of Iran (NCRI). In 1997, in an attempt to appease Tehran, then-President Bill Clinton designated Iran’s main opposition group, the PMOI/MEK as a Foreign Terrorist Organization. In 2012, then-Secretary of State Hillary Clinton de-listed the group. The NCRI is an Iranian political organization based in France. The organization is of a broad-based coalition, and the PMOI/MEK is under their umbrella.

Support for the NCRI is punishable by death in Iran. However, a majority of Iranian social media users shared the statement by NCRI’s President-elect Maryam Rajavi as she welcomed “the end of the appeasement era.”

In his article for Al-Arabiya English, Hamid Bahrami, former political prisoner and human rights and political activist, who works as a freelance journalist for such publications as Al Arabiya English, American Thinker, Euractive, Newsblaze and Eureporter, writes, “Indeed, the Iranian people always welcome any increased pressure on the Iranian regime and specifically its brutal paramilitary force, the IRGC, which plays a key role in suppression of civil society. Furthermore, the IRGC is the main force behind the crippling economic corruption, which have sparked thousands of popular anti-regime protests around the country during the last few months.”

He adds, “The designation of IRGC as Specially Designated Global Terrorists (SDGTs) will not only affect the regime’s vital arteries but also break the ubiquitous repression and atmosphere of fear in Iran.” He explains that, “Nearly all of Iran’s financial systems are in IRGC’s hands, which it utilizes to fund and arm terrorist groups, with the full knowledge of the Rouhani government that earlier this year decided to increase its budget.”

Many sources allege that companies and countries that trade with the regime are dong business with the IRGC.

Recent years have seen a significant growth of anti-regime protests in Iran. They are mostly related to economic and civic demands. Considering this, the US highlighting human rights issues and recognizing the Iranian Resistance movement, the NCRI, may help the Iranian people.

The Iranian people’s national interests may be aligned with the US, and the EU should recognize that the Iranian regime is facing significant problems.

Iran: Terrorist freed in Germany is welcomed by Tehran

RFE/RL: There once was a well-known restaurant in central...