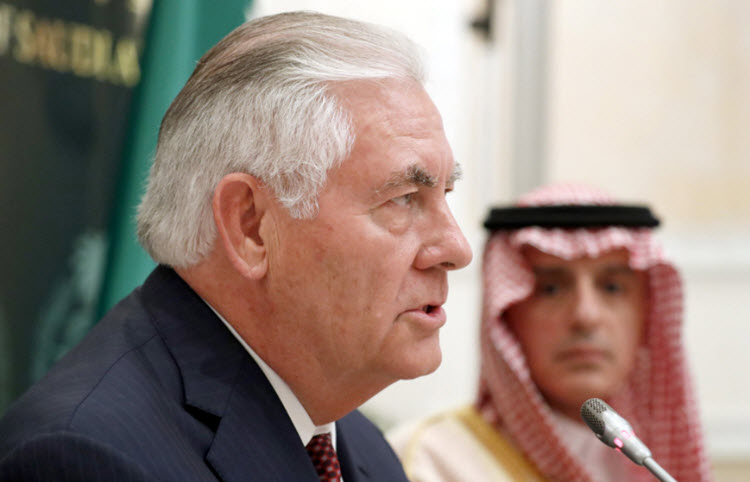 London, 23 Oct – The US Secretary of State, Rex Tillerson, has told Iranian-backed militias and their Iranian advisers to leave Iraq and “go home”, following his meeting with the leaders of Iraq and Saudi Arabia.

The US and Saudi Arabia have long been concerned about the Iranian Regime’s influence over Iraq and its government following the 2003 US invasion and more recently the growth of the so-called Islamic State.

At a joint news conference with Saudi Foreign Minister Adel Jubeir, Tillerson said: “Iranian militias that are in Iraq, now that the fight against Daesh and ISIS is coming to a close, those militias need to go home. The foreign fighters in Iraq need to go home and allow the Iraqi people to regain control.”

A senior US official clarified that Tillerson was referring to the Popular Mobilization Forces (PMF), part of the Iraqi security forces that get funding and training from Iran, and the Quds Force, the paramilitary arm of the Iranian Revolutionary Guard Corps (IRGC).

There are several thousand American troops still in Iraq who are able to train Iraqi forces and carry out raids against the remaining ISIS forces.

Iranian Foreign Minister Mohammad Javad Zarif criticised Tillerson’s remarks in a tweet, claiming that the US had effectively been bought by the oil-rich Saudi Arabia. However, it is Iran that seeks to build a malign sphere of influence across the Middle East, not Saudi Arabia.

Relations between Iraq and Saudi Arabia have been strained since former Iraqi President Saddam Hussein invaded Kuwait in 1990. Now, Saudi Arabia and other countries, like the United Arab Emirates, now see the inherent danger in allowing the Iranian Regime to control the Middle East and seek to stop it by, first of all, ending its influence over Iraq.

A new joint ministerial-level body between Iraq and Saudi Arabia met on Sunday, including Saudi King Salman and Iraqi Prime Minister Haider al-Abadi, to discuss rebuilding Iraqi territory reclaimed from ISIS, territory that the Iranian Regime would likely have kept for themselves.

Jubeir said: “The natural tendency of the two countries and people is to be very close to each other as they have been for centuries. It was interrupted for a number of decades. We’re trying now to make up for lost ground.”

Tillerson and Jubeir also discussed the US’s new policy towards Iran, including the decertification of the 2015 nuclear deal, a possible withdrawal from it and new sanctions on the IRGC.

Tillerson said: “Both our countries believe those who conduct business with the Iranian Revolutionary Guard, any of their entities, European companies or other companies around the world really do so at great risk.”