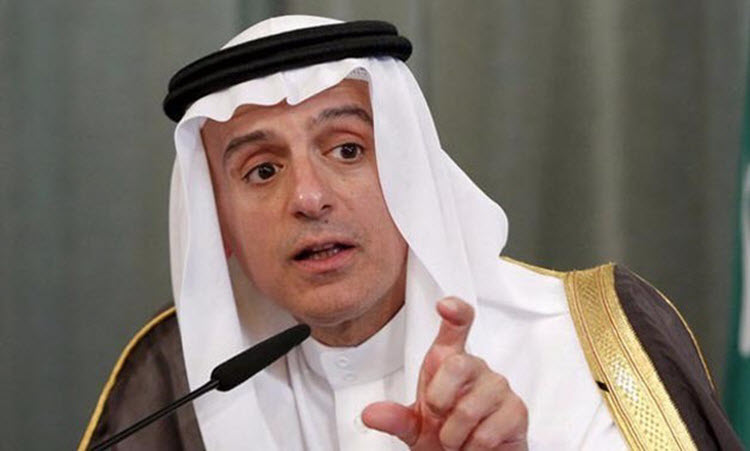 London, 10 Nov – The Saudi Arabian Foreign Minister has said that his country would welcome sanctions on the Iranian Regime for its support of terrorism and violation on the United Nations resolution on the testing of ballistic missiles that enshrines the 2015 nuclear agreement.

In an interview with CNBC, Adel al-Jubeir said that an effective strategy for dealing with the Regime would be to hold Iran accountable its support of terrorism and its illicit ballistic missile programme, as well as fixing the overall nuclear agreement.

These comments came just days after an Iranian-built ballistic missile was fired towards Riyadh International Airport by Iran-backed Houthi rebels in Yemen, on Saturday. The missile was caught by Saudi defence systems and destroyed before it could do any damage.

Jubeir said that this missile was incredibly similar to a missile that was launched against the city of Yanbu on July 22.

He said: “It’s a carrying missile, has a range of over 900 kilometres. It was smuggled into Yemen in parts and then assembled in Yemen we believe by the Revolutionary Guards and Hezbollah experts and then it was launched at our city.”

Jubeir said that the nuclear deal was in desperate need of fixing, particularly removing the sunset clause, which will eventually lift centrifuge restrictions on Iran.

Destabilisation of the Middle East

On the same day that the Houthis launched the attack on Riyadh, Lebanese Prime Minister Saad Hariri resigned in a shock press conference from the Saudi capital saying that he feared for his life.

He expressed concern that the Iran-backed Hezbollah and the Iranian Regime would assassinate him just as they did to his father in 2005.

Jubeir noted that this situation was unfortunate and that Hezbollah was one of the Iranian Regime’s most lethal instruments that they use against the Middle East. For this, he said that the international community should designate Hezbollah as a terrorist organization.

He said: “It is a result of Hezbollah’s activities supported by Iran. Hezbollah continues to maintain its militia even though it should hand over its weapons…Hezbollah pretty much hijacked the Lebanese system and Hezbollah has been the instrument that Iran uses to dominate Lebanon.”

He continued: “And so we see Hezbollah’s mischief all over the region. Hezbollah has been responsible for smuggling weapons into Bahrain. Hezbollah is involved in criminal activities such as drug dealing and money laundering.”

He noted that the money that the Iranian Regime uses to fund this destabilisation is stolen from the Iranian people and insisted that this money must be returned.

Bloomberg: Iran refuses to suspend work at its uranium-conversion...

AP: With large parts of Iraq in militant hands,...