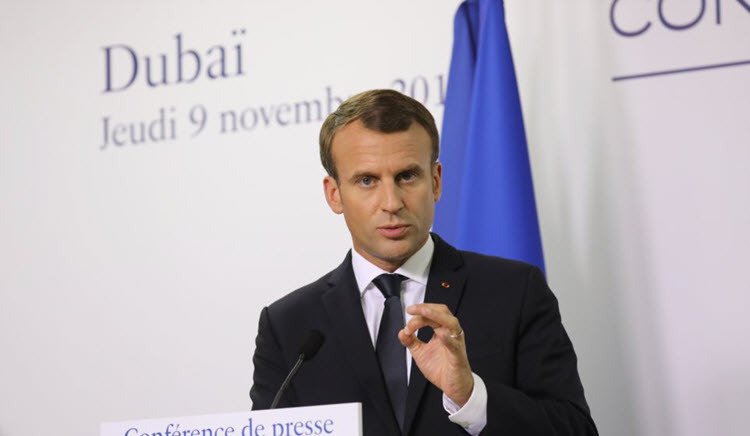 London, 10 Nov – France has joined the US and Saudi Arabia in blaming Iran for last weekend’s ballistic missile launch by the Houthi rebels in Yemen targeting Riyadh International Airport.

President Emmanuel Macron said, during a visit to the United Arab Emirates and Saudi Arabia on Thursday, November 9, that this illustrated the need for increased negotiation with Iran over missile development to prevent this happening again.

He said: “The missile which was intercepted by Saudi Arabia launched from Yemen, which obviously is an Iranian missile, shows precisely the strength of their [program]. There are extremely strong concerns about Iran [across the Middle East] and there are negotiations we need to start on Iran’s ballistic missiles.”

He compared this to the 2015 nuclear deal between Iran and six world powers including France, noting that the international community should begin on a framework, with sanctions if necessary, to encourage an agreement to stop Iran’s ballistic missile programme.

He underlined that he was not approaching this from a naïve standpoint, possibly recognising Iran noncompliance with the nuclear deal which led to Donald Trump’s decertification in mid-October.

He said: “It’s not about showing any naivety towards Iran, it is about standing beside our allies, in particular the United Arab Emirates. But it is also about not having a diehard policy that could create imbalances or even conflicts in the region.”

He said: “I believe it’s important that we work with Saudi Arabia for the purpose of guaranteeing stability.”

The ballistic missile was shot down by Saudi defence systems close to the airport, ensuring that no one was hurt, but it is the first missile to get so close to the Saudi capital.

Salman assessed that Iran had supplied the Houthis with the weaponry and warned that the attack could be “considered as an act of war”.

On November 7, the US joined Saudi Arabia in its claims and raised the point before the United Nations, citing the UN resolutions on arming the Houthis and Iran’s ballistic missile programme as reasons for UN intervention.

In his visit, Macron appeared to be positioning himself as an intermediary- something that he acted as in disputes between Iran and the United States over the nuclear deal.

In 2018, Macron has said that he will travel to Iran. If he does, he will be the first French president to travel there since 1971.

Threadbare Iran appeasement policy to be rescued with propaganda

AFP: The United Nations must guarantee the safety of...