Iran Regime Covers up Negligence and Corruption After Quake 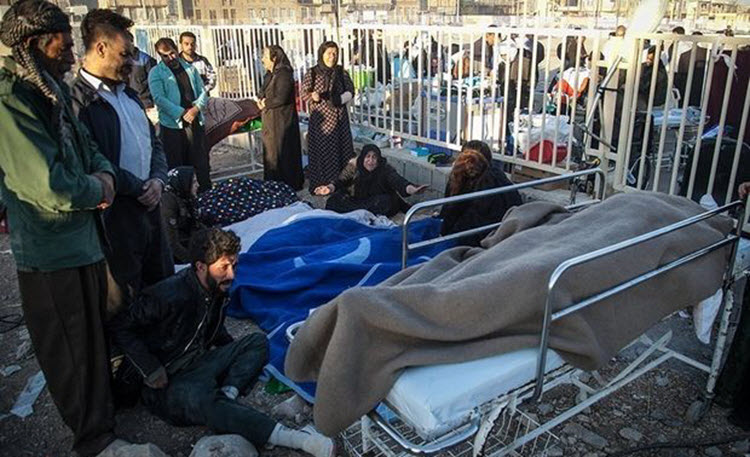 London, 16 Nov – The Iranian Regime is desperately trying to cover up its responsibility in the large-scale destruction that followed Sunday’s earthquake by downplaying the extent of the damage, suppressing the people, and refusing outside offers of help.

The Regime wants to suppress their people’s legitimate protest and anger over the disaster, so they sent in suppressive government forces like the Revolutionary Guards Corps (IRGC) led by Mohammad Ali Jafari and the Basij led by Ali Fazli, rather than aid conveys and the emergency services.

The Iranian people who live in the quake zone report that the paramilitary forces have not helped to rescue those trapped beneath the rubble or transport the injured to the hospital or even find shelter for the tens of thousands who now find themselves homeless. They have merely stopped the people from rising up.

What’s more the Regime is actively telling the Iranian people to stop searching for survivors in the rubble and go home. On state TV, the Regime had the gall to say “the situation has returned to normal, and officials have advised people to go to their homes”. The irony here is that these people have likely been rendered homeless because of the earthquake.

In response, Maryam Rajavi, President-elect of the Iranian Resistance, called on all young people, especially in the western provinces, to help the earthquake victims, and provide aid directly to the homeless and injured. She declared this a sacred national duty.

The Regime is also actively distorting the facts about the earthquakes and the extent of the damage through its state-run media outlets by claiming that there are only 530 dead while simultaneously reporting that 60-100% of towns and villages in the area are destroyed and all of the 12,000 government-built apartment complexes have been destroyed.

Those figures don’t add up at all.

After media reports said that 60% of the city of Sar-e-Pul Zahab has been destroyed with many residents still trapped under debris, the head of Rescue Organization of Red Crescent Society said that it was unlikely anyone was left alive.

Even one of the state-run daily newspaper Jame’eh Farda (Tomorrow’s Community) has admitted that the Regime is covering up the extent of the disaster to look better to the outside world.

They wrote: “The first line of the PR department’s instructions is to reduce the degree of crisis in giving out information…we hide the result of the anger of nature in the same way as we distract public opinion from political failures.”

International media outlets are banned from the area and cannot investigate for themselves.

Shahab Naderi, a member of the Iranian regime’s parliament, even admitted that there is no exact figure for the dead in many places.

He said: “Unfortunately, 90 to 95 percent of homes in Salas Babajani, Azgeleh, Jeygaran, and Javanrood have been destroyed, and because of the high level of destruction, the amount of relief is not enough… The earthquake-stricken population in these areas is high and rescue equipment is low…. But the popular donations and relief aid are still coming to the area more than our relief and rescue aid. The operation to remove the debris continues in this area.”

But why would the Regime want to cover up the scale of the disaster? Because the inherent corruption in the Regime has made the disaster much worse and caused many more to die.

It is no secret that the Regime-built buildings (many of which went up after 2005) were more heavily damaged than private buildings. This is because the Regime cut corners when building them- in order to line their own pockets- meaning that the buildings weren’t earthquake proof.

They are the reason that the death toll is so high and they don’t want the world to know.

AP: In an apparent change of heart, Iran says...