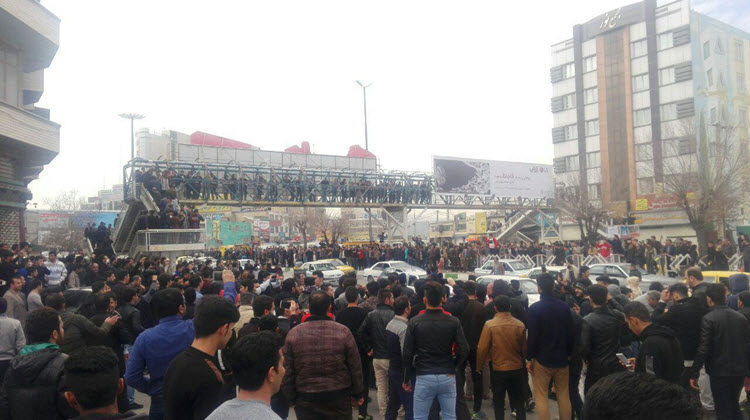 London, 2 Jan – At the start of a new year, the Iranian people certainly seem to have made their resolution to get rid of the brutal Regime that punishes them. Their protests- which were widespread and prominent throughout 2017- have taken on a new, bigger turn within the past couple of weeks.

Although it is unclear whether these widespread protests will spell the end of the Iranian Regime and their terrorist Revolutionary Guard Corps (IRGC), we can but hope. One thing is clear though- the protests have already gained worldwide attention and the Regime’s future is in jeopardy.

In 2017, the Iranian Regime was spreading terrorism and chaos throughout the Middle East- as it does every year- but the protesters have thankfully dampened the Regime’s celebrations.

However, one thing that is surprising about the Iranian people’s uprising is the coverage is Western media outlets. Big names like the BBC, CNN, The New York Times, and others have been roundly criticised for misinformation about the protests.

American researcher and politician Elliot Abrams criticised the NYT for “suspicious” coverage that belittled the protests, while Republican Senator Ted Cruz criticised CNN for marginalizing the protests, and Saudi journalist Mashari Althaydi criticising the BBC for downplaying the extent of the protests and initially focusing on demonstrations supporting the regime (read: paid protesters).

Althaydi, a former managing senior editor at pan-Arab newspaper Asharq al-Awsat, wrote, in an op-ed on Al Arabiya: “The Iranian regime’s behaviour toward this uprising has so far led to the deal of 10 people, with dozens wounded or in jails.”

It is also strange that they chose to report it like that when you consider that the Iranian Regime was shut down social media platforms (like Telegram and Instagram) which protesters are using to communicate.

This was confirmed in the Regime-affiliated Iranian Students’ News Agency, who quoted one of the IRGC brigades, Ismail Kuthari, as saying that the regime would fight the protests “with an iron fist”.

Althaydi wrote: “If this would have happened in Egypt, for example, how would have BBC, New York Times, CNN or German Deutchwelle covered this incident? Would they cover it extensively and pursued which angle?”

This coverage is not only wrong- it is dangerous. There is something very wrong with the Iranian Regime and the only way for the people to change that is through constant protest; they have no other options.

One hopes that the Iranian people will succeed in their fight for a free Iran very soon.

Washington Times: Iran is building nuclear weapons through both...