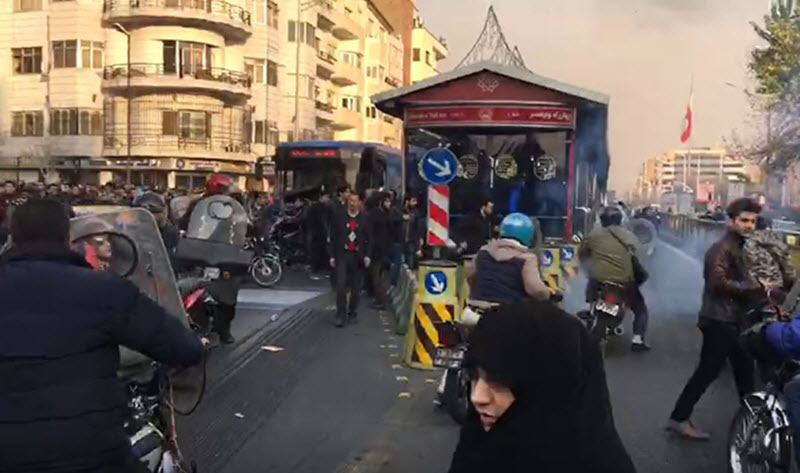 London, 12 Jan – The current Iranian protests are notable for two main reasons: geographic scope and range of grievances. Unlike previous protests, these are mainly populated by the working class, taking place in almost every city and town in Iran, without a singular cause.

In fact, here are just a few of their complaints:

The only thing that all protesters agree on- no matter their complaint- is that the Iranian Regime is the cause of the problem and must be evicted from the region.

Kaveh Ehsani, an Assistant Professor of International Studies at DePaul University, and Arang Keshavarzian, an Associate Professor of Middle Eastern and Islamic Studies at New York University, wrote on Jacobin: “At their core, these protests are a moral outcry of the marginalized periphery against what it perceives to be a callous center and its betrayal of the social justice vision that animated and united the revolutionary forces of 1979.”

Protests against the Regime are not a new thing, there have been many thousands over the past four decades, but they don’t usually get international attention and, as a result, most protesters are dealt with brutally by the Regime in an attempt to crush the people’s spirit. Still, the Iranian people are rising up to demand their freedom; their grievances have now exploded.

Ehsani and Keshavarzian wrote: “While it’s too soon to know who the Iranians were that dared to participate in the protests, ample evidence suggests that they were neither the abject poor nor the beneficiaries of this uneven political economy. Rather, ordinary people’s aspirations have been shaped by a paradoxical mixture of anger against social and economic injustice and consumerist desires cultivated by the developmentalist state’s promises of material security and affluence.”

They were ignored by the Regime- and the world at large- so they came together and consolidated their issues into one: the ruling mullahs.

If the Regime stood any chance of remaining in power, they would quickly address the issues raised, but the Regime would rather fruitlessly attempt to suppress the Iranian people. Decades of ignoring these crises and a lack of control over large portions of the budget doled out to organizations controlled by the Supreme Leader Ayatollah Khamenei have left the Regime ill-equipped to manage them and things will only get worse before the Regime falls.

Ehsani and Keshavarzian wrote: “The government may try to alleviate tensions by rewriting the budget and reinstating the subsidies and cash payments that it had planned to slash. A new round of highly publicized anti-corruption cases may also be a means for the regime to argue that it is taking action and responding to social demands. But the social realities of those living on the jagged edges of Iranian society will persist. What makes the demonstrations against malfeasance and the calls for political change and social justice powerful is the fact that the protesters are accusing Iran’s rulers of violating the revolution’s commitment to a moral economy.”

Iran Places Sanctions on US Companies for Links to Terror

AFP: Latin American nations need to be cautious with...