The Iran Protests Are Different This Time Around 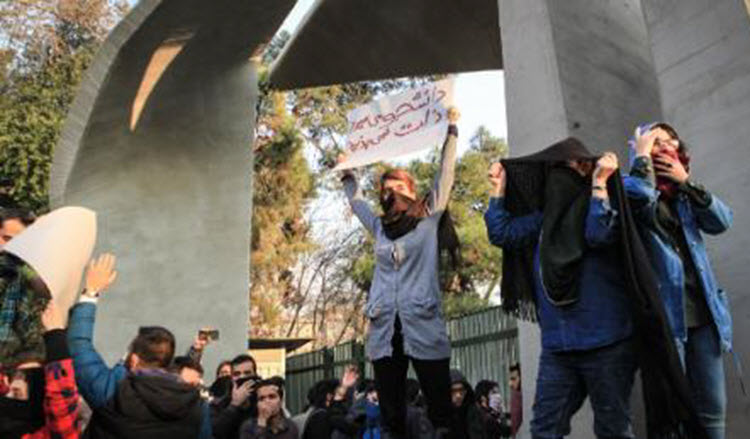 London, 15 Jan – No matter what the Iranian Regime would have you believe, the protests in Iran are not over and they are not being organised by foreign governments.

Human rights activist Heshmat Alavi wrote on Track Persia: “[This] is a struggle between the Iranian people literally fed up with this regime and a dictatorship weakened from domestic unrest, internal rifts and international pressures.”

Of course, the weak Iranian Regime is quick to blame others—specifically the Iranian opposition People’s Mojahedin Organization of Iran (PMOI/MEK) – because it can’t deal with the current protests, which are totally different from those seen before.

How these protests are different:

1. Despite the potential death penalty, Iranians are proudly calling for an end to the Regime and the death of Supreme Leader Ali Khamenei.

2. Protests are taking place in small, rural areas (like Izeh, Dorud, and Shahin Shahr) as well as major cities like Tehran.

3. Protesters are hitting back after attacks from the so-called security forces by attacking their buildings and vehicles.

4. Various members of the paramilitary Basij have crossed the aisle and joined the protesters, using a hashtag meaning I’m not a Basij on social media.

5. The Regime has increased its internet censorship to stop protesters from communicating amongst themselves or to the outside world but protesters have used software, like virtual private networks (VPNs), to circumvent it.

6. The US government had made it clear that it supports the protesters and warned Iran against its crackdown, while some politicians in Canada, France, Germany and the United Kingdom have also offered support.

7. Despite large-scale arrests, the Iranian people are refusing to be silenced and are demanding the release of the political prisoners. As a result, the notorious Evin Prison released four political prisoners on January 9. Although not good enough, it does show a turning point.

8. The United Nations Security Council looked over a sensitive dossier related to human rights violations, free speech restrictions, and internet censorship during the protests in less than a week after the protests began.

9. No longer can the world pretend that there are moderates in the Iranian Regime, as the protesters widely proclaim that there is no good versus evil divide in the mullahs’ ranks.

10. The true nature of Iran’s media outlets has been revealed and now it is clear which are dedicated to the truth and which are mouthpieces for the Regime.

Alavi wrote: “This popular movement is proving it bears the capability of overcoming previously impossible odds. In response, the ruling regime has no solution to provide for the people’s valid demands, while lacking the will of resorting to all-out crackdown, fearing Iran’s powder-keg and a strong international response.”

It appears that things may finally be changing in Iran, as a direct result of the Iranian people and their demand for freedom.

AFP: President Mahmoud Ahmadinejad said on Sunday he had...

Iranian Holocaust book to be issued in English