Six Dead in Clashes Between Iranian Security Forces and Protesters 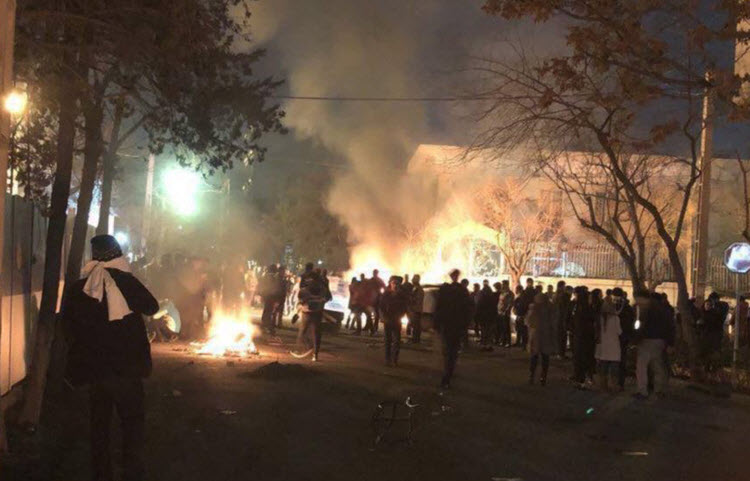 London, 20 Feb – Six people have now died in clashes between the Iranian Regime’s security forces and members of the Sufi faith in Gonabadi.

Currently, the death toll stands at six, with three riot police, two members of the paramilitary Basij force, and one protester having died.

Videos have emerged showing vehicles ploughing into the Regime’s security forces and both drivers have been arrested, but it is important to note that this is the desperate act of a community who are under constant attack from the Regime and have exhausted their other options. You can even hear protesters saying this is one of the videos.

Kasra Nouri, one of the protesters, has denied any involvement by members of the Sufi faith in the deaths of the police officers.

He said: “The bus was parked there, and then started to move, and the dervishes had nothing to do with the accident.”

At least seven more have been injured and are being treated in hospital.

After Nematollah Riahi was arrested, other members of the Sufi faith held a demonstration in front of the police precinct to protest the arrest, but this led to violent clashes with the police.

The 72-year-old was believed to be defending the house of Dr. Nour Ali Tabandeh, the leader of the Gonabadi order against an attack by the Regime at the time of his arrest.

Nouri said: “Some 100 policemen attacked the dervishes and shot at them. We are worried about our security in the area, while we are defending our leader, Dr. Nour Ali Tabandeh. Our resolve is to defend him up to the last drop of our blood.”

He added that the police promised to release Riahi and not arrest any more people, but the Regime had gone back on that promise.

The Iranian Regime has confirmed that 300 protesters have been arrested as a result of this demonstration, while members of the Sufi faith say that at least one of the protesters has been killed under torture by the security forces.

One in Three Iranians Live Below the Poverty Line

How much did the minimum intake cover the poverty...