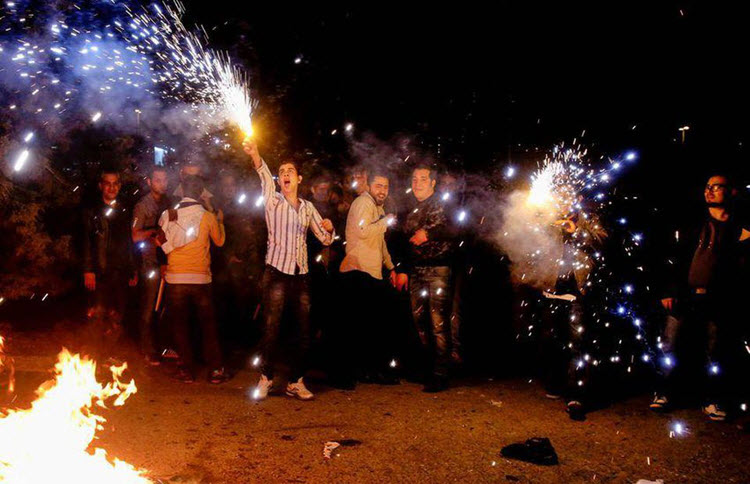 London, 14 Mar – The Iranian National Fire Festival, known as Chaharshanbeh Suri in Persian began on Tuesday, March 13th. Reports of political activities throughout the country that have been organized by the network of the Iranian opposition People’s Mojahedin Organization of Iran (PMOI/MEK), are widespread.

MEK supporters inside Iran called on the people, especially the youth, to demonstrate their objections to Government during the celebration of the Persian year. Leaflets and flyers in support of this call were distributed in cities a few weeks ago.

While pictures of Iranian Supreme Leader Ali Khamenei were set on fire amid chants of “Down with Khamenei”, pictures of Maryam Rajavi, President-elect of the National Council of Resistance of Iran (NCRI), were posted in various locations. People took to the streets, defying the repression of the Government. They expressed their desire for regime change.

People across the country protested with chants of “Death to Khamenei” and “Death to the dictator.” They lit firecrackers and jumped over fires, even though that had been prohibited. The fire celebration took on a new meaning with the burning of the Supreme Leader’s posters.

Public statements by shopkeepers, bazaar merchants, university students, and people from various social strata throughout the country show their support of the MEK’s call to action.

Social media was also on fire on Tuesday. Twitter was trending the hashtag #ديكتاتور در آتش, which means “dictator on fire”. Photos and clips of anti-Government activities, relaying the spirit of this year’s Chaharshanbeh Suri campaign, also flooded cyberspace.

Since the uprising during last December and January, that began spontaneously in the holy city of Mashhad and quickly spread throughout the country, multiple Iranian cities have continued to witness new anti-government protests. Thousands of farmers in eastern Isfahan rallied on March 9 to protest against Government for lack of water due to the Government’s policies. Additionally, agricultural workers and retired workers at a factory in the Khuzestan province protested and collectively went to the company’s yard, closed the gate, and prevented the movement of the trucks out of the factory.

The Iranian people are continuing to make their voices heard, despite threats of torture, imprisonment, and violence against their families. The conditions in Iran are reaching a boiling point.

AFP: Tehran's cyber police chief has been sacked for...