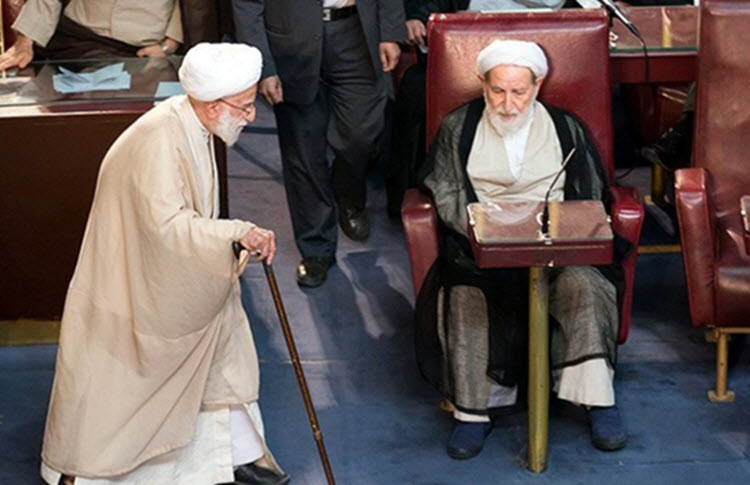 London, 15 May – The Assembly of Experts of the Leadership (AEL), also known as the Assembly of Experts (AoE), is the deliberative body empowered to designate and dismiss the Islamic Republic’s Supreme Leader and supervise his performance. The chairman of the influential body, Ayatollah Ahmad Jannati, has called upon President Hassan Rouhani to apologize to the people of Iran for not respecting conditions laid out by Supreme Leader Ayatollah Ali Khamenei for negotiating the nuclear deal.

He accused Rouhani in the statement for disregarding red lines set by Ali Khamenei for the government’s nuclear talks with the U.S. and world powers, and said that Rouhani should “present his apologies to the Iranian nation for the damage it has caused.”

President Trump announced the U.S. withdrawal from the agreement earlier this month.

According to Rouhani, all JCPOA-related negotiations were held under the direct supervision of the Supreme Leader. As well, the negotiations began during Mahmoud Ahmadinejad’s presidency.

Although Khamenei agreed to the deal early on in October 2015, he listed conditions for Iran’s participation in the agreement. Those conditions were immediately dismissed by negotiators on both sides, because they were presented after the deal had already been signed.

In fact, Khamenei has described the nuclear deal as a “heroic victory” for himself, but has also criticized it as “totally skewed” in favor of the West.

Jannati’s statement came as Foreign Minister Mohammad Javad Zarif’s arrived in Brussels on May 14th. Zarif is attempting to try to salvage the deal with European partners despite the U.S. withdrawal. He has been assigned to seek assurances from the remaining JCPOA parties’ that they will keep to the deal if Iran remains loyal in its commitment to curb its nuclear program.

Jannati dismissed Zarif’s latest efforts, calling them as pointless.He says that European powers are in league with the U.S. against Iran.

Major General Mohammad Ali Jafari, Chief Commander of the Islamic Revolutionary Guards Corps (IRGC), has also criticized the Rouhani administration. Pointing out “certain officials” who “turn to foreigners,” Gen. Jafari said, “I hope recent events will lead us to ending our trust in the West and the Europeans.” IRGC-run Fars news agency cited Jafari as saying, “The Europeans have repeatedly proved that they are not capable of resisting U.S. sanctions.”

Deputy Speaker of parliament and MP from Tehran Ali Motahari defended his government against Jannati’s attacks. He said that one of Iran’s most “complicated problems” is the interference of different institutions in each other’s affairs. He added, “The Assembly of Experts has no legal right to interfere in cases such as the JCPOA or to set agendas for the president or parliament.”

Protests across Iran have become chronic, and one of...