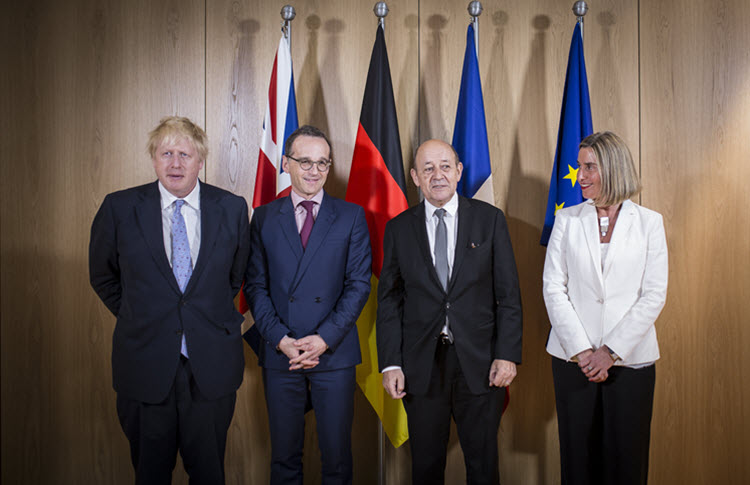 London, 16 May – One week after Donald Trump withdrew from the 2015 Iranian nuclear deal, citing numerous issues including that it did not stop Iran from developing nuclear weapons, the European signatories are scrambling to keep Iran in the deal.

British Prime Minister Theresa May, French President Emmanuel Macron, and German Chancellor Angela Merkel have all agreed to abide by their obligations and keep the deal going, stating that it remains important for their “shared security”.

They’ve even called on the US not to take action that would prevent them from fulfilling their obligations.

It’s odd that Europe and America have completely different opinions about whether or not the deal is in their security interests, especially when combating terrorism and preventing nuclear war should be in everyone’s interests.

Given that we have plenty of evidence that Iran’s nuclear programme is still running in secret, it actually seems like Europe is being swayed by trade deals with Iran, rather than national security. And the nuclear information doesn’t even begin to address Iran’s abuse of human rights, development of ballistic missiles, or their belligerence in the Middle East.

These trade deals must be incredibly lucrative if three heads of state are willing to look the other way on terrorism and nuclear war, which is why the US must ignore Europe’s pleas and impose more secondary sanctions on Iran, like those placed on the head of Iran’s central bank on Tuesday. If Europe’s national security isn’t enough to make them back out of the accord, then perhaps targeting their trade deals with Iran will.

Sawsan Al Shaer, a Bahraini writer and journalist, wrote on Al Arabiya that Gulf countries should be prepared to nix trade deals with Europe and commit themselves to US sanctions in order to protect their national security.

After all, it’s not just Europe that is at risk through their dealings with Iran, but rather the whole world. The funding of Iran promotes terrorism and aggression in the Middle East and across the world, as we have seen from Iran’s funding of Hezbollah and interference in Yemen, Syria, and Iraq.

This doesn’t even address the fact that Iran doesn’t trust Europe and may well renege on the deal before long, according to reports about a meeting between Supreme Leader Ali Khamenei and Iranian officials.

Iranian President Hassan Rouhani has even ordered the Atomic Energy Organization to prepare to restart its nuclear enrichment programme again.

Shaer wrote: “If the nuclear agreement with Iran did not deter it from spreading terrorism and chaos and from entering Arab lands and supplying militias with weapons and ballistic missiles and if Iran does not trust Europe, then what is the point of this deal?”

Indeed, why would anyone want to keep this deal alive?