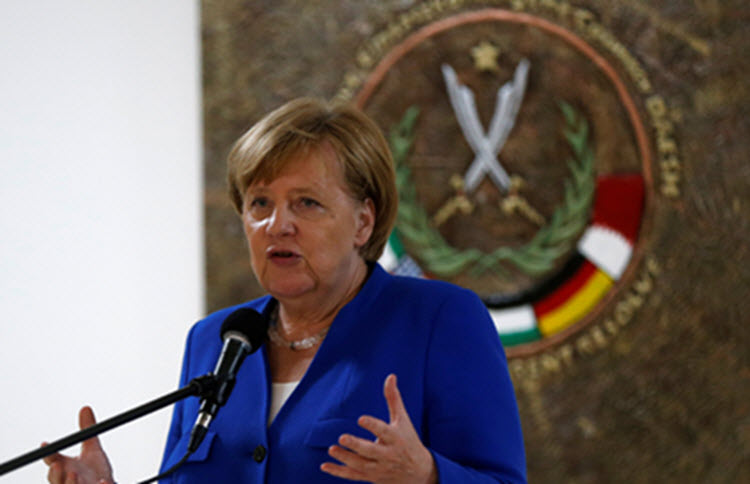 London, 21 Jun – After meeting Jordan’s King Abdullah in Amman on Thursday, German Chancellor Angela Merkel said European countries shared concerns over Iran’s ballistic missile program and called for solutions to its “aggressive tendencies” in the Middle East. The German Chancellor said, “Iran’s aggressive tendencies must not only be discussed, but rather we need solutions urgently.”

She also announced 384 million euros ($445 million USD) of aid to Jordan this year.

U.S. President Donald Trump withdrew from the Iran nuclear deal, which lifted sanctions on Tehran in exchange for curbing its atomic program in May, but Germany has remained party to the deal.

According to Merkel, while European countries want to maintain the 2015 accord, they shared concerns over Iran’s ballistic missile program, and its presence in Syria and its role in the war in Yemen.

Iran supports of Syria’s President Bashar al-Assad with military, sending some of its own forces there, as well as backing Shi’ite militias from Lebanon and Iraq. Gulf and Western countries accuse Tehran of arming the Houthi group in Yemen, but Iran denies this.

Merkel voiced support for Jordanian concern regarding Iranian activity in southwestern Syria, near the Israeli-occupied Golan Heights, where Damascus, Tehran’s ally, is increasing military operations. She explained, “You live not just with the Syria conflict, but also we see Iran’s activities with regard to Israel’s security and with regard to Jordan’s border.”

Earlier this month Merkel met with Israeli Prime Minister Benjamin Netanyahu, and following that meeting stated that the question of Iran’s regional influence was “worrying, especially for Israel’s security”.

King Abdullah met Netanyahu on Monday, and with US President Trump’s son-in-law and regional envoy Jared Kushner on Tuesday. He said there could be no peace in the Middle East without a Palestinian state with Jerusalem as its capital. Although not yet made public, the United States is preparing a new peace plan, which has already angered Palestinians by recognizing Jerusalem as the capital of Israel.

Merkel said reforms should be balanced and “not hit the wrong people.” She added that, in addition to the 384 million euros in aid for Jordan, Germany is also providing it with a $100 million credit line to help it cope with the requirements of the IMF reforms.

US dishonours its promise to Iranian refugees

Sunday Telegraph: In recent weeks, widely reported in the...